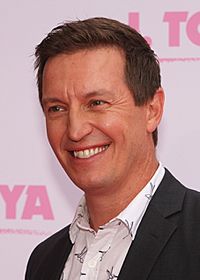 John Henry Michael "Rove" McManus (born 21 January 1974) is an Australian comedian, television and radio presenter. He is best known as the host of variety show Rove from 1999 to 2009. He was awarded the Gold Logie Award for Most Popular Personality on Australian Television in 2003, 2004 and 2005. Other projects include hosting Rove LA and Whovians. He has also appeared in Good Morning Australia, John Safran vs God, Pulp Sport, The Living Room, The Project, Studio 10, Celebrity Name Game, Have You Been Paying Attention New Zealand? and Hughesy, We Have a Problem.

McManus was born in Perth, Western Australia. He married actress Belinda Emmett in 2005. She died of breast cancer in 2006. He later married actress Tasma Walton. The couple have one child. His first cousin is Australian rules footballer Shaun McManus.

All content from Kiddle encyclopedia articles (including the article images and facts) can be freely used under Attribution-ShareAlike license, unless stated otherwise. Cite this article:
Rove McManus Facts for Kids. Kiddle Encyclopedia.