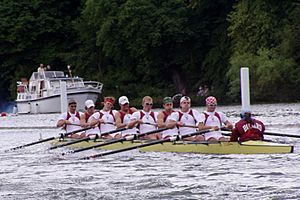 A rowing team in competition

Rowing is about moving a boat on water using human muscle power. It can be a sport. The goal in rowing is to move as fast as possible on top of the water. The athletes use a boat. They move the boat forward by using two sculls or one oar. There are different types of rowing. The types depend on how many people are in the boat and if they have a coxswain or not. Rowing is a very popular sport in England, the Commonwealth, and the Northeastern United States. The old universities of the United States and England have yearly rowing matches.

All content from Kiddle encyclopedia articles (including the article images and facts) can be freely used under Attribution-ShareAlike license, unless stated otherwise. Cite this article:
Rowing Facts for Kids. Kiddle Encyclopedia.