Roxwell is a village and civil parish in the Chelmsford District of Essex, England. The village is approximately 4 miles (6 km) west from the centre of the county town of Chelmsford, and to the south of the A1060 road, on which are the parish hamlets of Boyton Cross and Chalk End. Further Roxwell hamlets are Peppers Green at the north of the parish and Radley Green at the south. 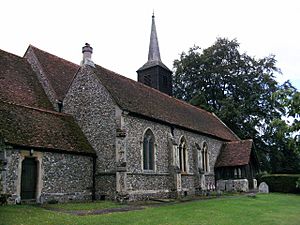 St Michael and All Angels' church

The Anglican parish church of St Michael and All Angels dates from the 14th century and is a Grade II* listed building. There is a primary school called Roxwell Church of England Voluntary Controlled Primary School which is linked to the local Anglican parish church, the Chequers public house, and a village store and post office.

Newland Hall, an Elizabethan manor house on Bishop Stortford Road, was built by the Newland family, descendants of the 13th century lord of the manor Ralph de Neweland. At the time of the Domesday Book, the land was owned by Eustace, Earl of Boulogne. The Hall is now used as a wedding venue. 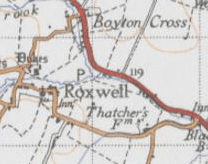 "a parish, with a village, in Chelmsford district, Essex; on the river Chelmer, 4½ miles W by N of Chelmsford r. station."

All content from Kiddle encyclopedia articles (including the article images and facts) can be freely used under Attribution-ShareAlike license, unless stated otherwise. Cite this article:
Roxwell Facts for Kids. Kiddle Encyclopedia.