The rufous songlark (Cincloramphus mathewsi) is a species in the family Locustellidae endemic to Australia.

It is a species of Megaluridae, the Old World warblers, a successful passerine family.

The rufous songlark was described by English ornithologist Tom Iredale in 1911. An alternative generic name Cincloramphus is derived from Greek words cinclus/κιγκλος "wagtail" and ramphos/ραμφος "beak", while the specific epithet honours Gregory Mathews.

As well as rufous songlark, other common names include red-rumped songlark, rufous singing lark, and skylark.

The rufous songlark is medium brown passerine songbird with a pattern of streaks on its feathers. Encyclopædia Britannica describes this bird as "drab and vaguely larklike". It has a dark line through its eye, a pale eyebrow and pale underparts, and a rufous upper tail and rump. A little larger than a house sparrow, the male grows to about 19 cm in length and is larger than the female who reaches only about 16 cm. 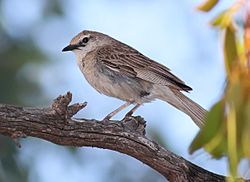 The rufous songlark is common all over mainland Australia, but is uncommon in the northern Top End of the Northern Territory (Goodfellow & Stott, 2001; 2005). and rare on the island of Tasmania. The overall range of the songlark is thought to be in the order of between 1,000,000 and 10,000,000 km2. C. mathewsi is most often found in New South Wales, Queensland, and Western Australia. Each year the rufous songlark spends colder months in the north and migrates south in the summer to breed, and in this way it typically is only seen in the warmer months.

The rufous songlark hunts close to the ground for the insects and other small arthropods upon which it feeds. The bird can be found in grasslands, grassy open woodlands, agricultural areas, and mulga that it favors as a habitat. Living in areas populated by humans, it sometimes ends up as road kill.

Outside the breeding period these birds form small flocks of up to two dozen individuals. In the breeding season the lively, unmistakable song of the male rufous songlark is heard almost continuously. He chirps and curves his back while going on slow, showy "display flights" between trees. The distinctive "twitchy tweedle" song of the rufous songlark has been included on CDs of "Favourite Australian Birdsong". Without help from the male, the female bird builds a deep nest of grass sheltered amid grass or low vegetation. She also incubates the eggs and raises the fledglings herself.

Serventy, V.N. (ed) 1982. The Wrens and Warblers of Australia. Angus and Robertson and the National Photographic Index of Australian Wildlife, Sydney.

All content from Kiddle encyclopedia articles (including the article images and facts) can be freely used under Attribution-ShareAlike license, unless stated otherwise. Cite this article:
Rufous songlark Facts for Kids. Kiddle Encyclopedia.