Rushville is a city in Rushville Township, Rush County, in the U.S. state of Indiana. The population was 6,341 at the 2010 census. The city is the county seat of Rush County. It, like the county, was named in honor of Dr. Benjamin Rush, who signed the Declaration of Independence.

Rush County was formed from the unorganized Delaware County April 1, 1822. On July 29 town lots were sold and the town started to form. A school had already been started in 1821 by Dr. W.B. Laughlin, who was a member of the Legislature when the county was formed, and is considered the founding father of the town. A jail was built, Charles Veeder, was the first postmaster in 1822, and a courthouse was built in 1823. The Dog Fennel Gazette was published in 1823. The railroad was built in 1850 and after that a bank, factories, mills, and grain elevators sprang up.

The Rushville post office has been in operation since 1822. 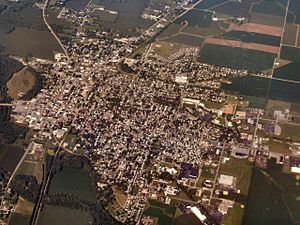 Rushville from the air, looking west.

The town has a lending library, the Rushville Public Library.

All content from Kiddle encyclopedia articles (including the article images and facts) can be freely used under Attribution-ShareAlike license, unless stated otherwise. Cite this article:
Rushville, Indiana Facts for Kids. Kiddle Encyclopedia.