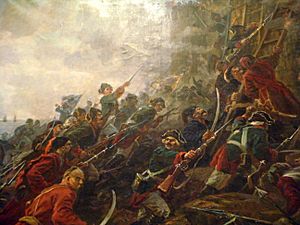 Russian and Cossack troops take the fortress of Khadjibey, defeating the Ottomans and thus providing the impetus to found Odessa.

The Russo-Turkish wars (or Ottoman–Russian wars) were a series of wars fought between the Russian Empire and the Ottoman Empire between the 17th and 20th centuries. It was one of the longest series of military conflicts in European history. Except for the war of 1710–11 and the Crimean War, which is often treated as a separate event, the conflicts ended disastrously for the stagnating Ottoman Empire; conversely they showcased the ascendancy of Russia as a European power after the modernisation efforts of Peter the Great in the early 18th century.

All content from Kiddle encyclopedia articles (including the article images and facts) can be freely used under Attribution-ShareAlike license, unless stated otherwise. Cite this article:
Russo-Turkish War Facts for Kids. Kiddle Encyclopedia.