The Emperor was a freighter built in 1910; it sank off the shore of Isle Royale in Lake Superior in 1947 and the remains are still on the lake bottom. The wreck was placed on the National Register of Historic Places in 1984. 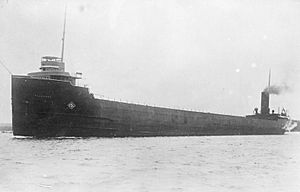 An early photograph of the Emperor

The Emperor was constructed in 1910 by the Collingwood Shipbuilding Co. in Collingwood, Ontario, for the Inland Lines Ltd. of Midland, Ontario. It was launched on December 17, 1910 and assigned registry number 126,654. At 525 feet in length, it was the largest Canadian-built freighter ever built at the time of her launching. The ship had a beam of 56 feet in beam, a depth of 27 feet, with 4641 registered tons and 7031 gross tons. It contained a 1,500 horsepower triple expansion steam engine with two Scotch boilers which powered the ship to a nominal speed of 10 knots. The Emperor was built of steel, with an arch and web frame construction to provide an unobstructed cargo hold with hatches placed every 12 feet. The pilothouse, captain's quarters, and mate's quarters were at the bow of the ship, and the crew's quarters and engine room were aft, with unobstructed deck space between.

Although launched in 1910, the Emperor did not begin its first voyage until April 1911. On its first trip, the ship broke its main shaft in Thunder Bay, Ontario and had to be towed all the way to Detroit for repairs. Also in 1911, the ship overrode its anchor while in the Soo locks, tearing a hole in the bottom and sinking the vessel.

In May, 1916, the ship was sold to the Canada Steamship Lines Ltd. It was involved in some additional minor incidents, including the death of a crew member who fell into the hold in 1918, groundings in 1926 and 1937, and the loss of a rudder in 1936.

The wreck of the Emperor

The Emperor left Thunder Bay, Ontario on the night of June 3, 1947, laden with 10,429 tons of iron ore. At about midnight, the captain turned the ship over to the first mate, who had been in charge of loading cargo only hours earlier. It is likely that fatigue contributed to the mate's failure to catch the error in the ship's heading. At 4:15 on the morning of June 4, the Emperor ran aground on the north side of Canoe Rocks, on the northeast end of Isle Royale. The ship sank within 30 minutes, killing twelve crewmembers, including both the captain and the first mate. A Coast Guard cutter was nearby, and the remaining crewmembers were rescued 30 minutes later.

Search and rescue operations were begun shortly thereafter, but no more survivors were found. Some dives were made to the wreck to locate remains of the crew, but no salvage operations were attempted. The body of a victim was discovered by sport divers in 1975, and was reportedly removed by Canadian officials. The wreck of this ship is a significant event in the history of Thunder Bay, Ontario.

The Emperor quickly became an attraction to sport divers. There is some detritus located near the site from the 1910 stranding of the SS Dunelm. The wreckage is essentially intact, with damage to the bow, but an intact prop, engine room, and numerous cabins. It sits in 25 to 175 feet of water, with the bow sitting higher than the stern. Two dive buoys are available for mooring, one at each end of the ship. The Emperor is the most popular wreck to dive in the Isle Royale National Park, with over 350 dives made in 2009 out of 1062 dives made to wrecks in the park.

All content from Kiddle encyclopedia articles (including the article images and facts) can be freely used under Attribution-ShareAlike license, unless stated otherwise. Cite this article:
SS Emperor Facts for Kids. Kiddle Encyclopedia.