Sacred cow is an idiom. It is an expression or phrase that is used without the literal meaning of being about a cow or religion. When spoken or written it means a person or a belief that has been respected for a long time. It has become sacred and people are then afraid or unwilling to criticise or question it.

The idiom is based on the honor shown to cows in Hinduism. It is thought to have started in America in the early 20th century. Similar idioms are used in many other languages. Saying "holy cow!" when surprised may be another example.

An actual 'sacred cow' or 'sacred bull' is a real animal that is treated with sincere respect.

In Hinduism, the cow is thought to be sacred, or deeply respected. Hindus do not worship cows, although they are held in high esteem. The reason has to do with the cow's agricultural uses and gentle nature. Hindus rely heavily on cows for dairy products, for tilling fields, and for dung as a source of fuel and fertilizer. So, the cow is seen as a 'caretaker' or maternal figure. One Hindu goddess is usually shown in the form of a cow: Bhoomi (ভূমি). She represents the Earth.

Most Hindus respect the cow for her gentle nature. This represents the main teaching of Hinduism, which is do no harm to an animal (ahimsa). The cow also represents butter (ghee) and strength. The cow is honored in society, and many Hindus do not eat beef (cow meat). Beef consumption is more prevalent among Hindus in the larger Indian subcontinent, for example, Tamil Hindus in Malaysia. In the majority of Indian states it is illegal to eat or possess cow meat. 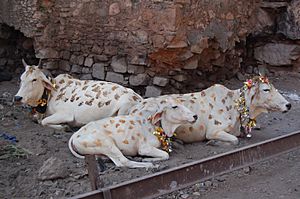 In the Hindu tradition, the cow is honored, garlanded and given special feedings at festivals all over India. One is the annual Gopastami festival, dedicated to Krishna and cows.

The cow's nature is represented in Kamadhenu, the goddess who is the mother of all cows. In India, more than 3,000 institutions called Gaushalas care for old and infirm cows. According to animal husbandry statistics there are about 44,900,000 cows in India, the highest in the world. So while some old and infirm cows are treated in Gaushalas, the rest are generally abandoned at public places such as railway stations and bazaars.

Honoring the cow inspires in people the virtues of gentleness and connects them with nature. The cow gives milk and cream, yogurt and cheese, butter and ice cream, and ghee. The milk of a cow is believed to refine a person. The ghee (clarified butter) from the milk is used in ceremonies and in preparing religious food. Cow dung is used as fertilizer, as a fuel and as a disinfectant in homes.

All content from Kiddle encyclopedia articles (including the article images and facts) can be freely used under Attribution-ShareAlike license, unless stated otherwise. Cite this article:
Sacred cow Facts for Kids. Kiddle Encyclopedia.