The building is occasionally referred to by locals as "The Box the Space Needle Came In", in reference to the city landmark nearby. Safeco Plaza was completed in 1969 by the Howard S. Wright Construction Company for Seattle First National Bank. It dwarfed Smith Tower, which had been the tallest building in the Downtown area since 1914, and edged out the Space Needle (finished in 1962) in Seattle Center by 25 ft (7.6 m). It remained the tallest structure in the city for sixteen years, until the Columbia Center was completed in 1985.

The bronze-colored aluminum and glass structure was the first modern class-A office building in Seattle and is the first skyscraper in the world to feature a Vierendeel space frame. The structure includes a two-story lobby as well as a five-story subterranean garage. Other amenities include 15,000 square feet (1,400 m2) of ground-floor retail featuring a fitness center, a bank, some restaurants, a medical center, and a post office. The property also houses a sculpture titled Three Piece Sculpture: Vertebrae 1968 by Henry Moore which is owned by the Seattle Art Museum. 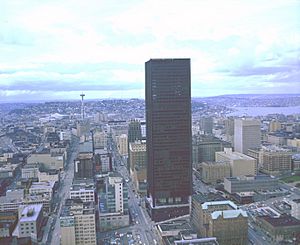 Originally the headquarters of Seafirst Bank, it was sold fourteen years later in 1983. Safeco Insurance Company of America leased 284,000 square feet (26,400 m2) of the building on May 23, 2006, to be its headquarters, moving from its former building in the University District and Redmond, and renamed it Safeco Plaza. The company announced in 2015 that it would consolidate its offices into the tower, increasing its lease from 17 to 26 floors.

All content from Kiddle encyclopedia articles (including the article images and facts) can be freely used under Attribution-ShareAlike license, unless stated otherwise. Cite this article:
Safeco Plaza (Seattle) Facts for Kids. Kiddle Encyclopedia.