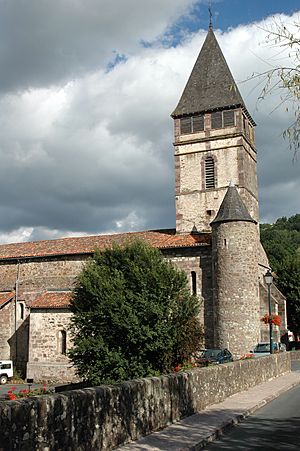 Saint-Étienne-de-Baïgorry is a commune in the Pyrénées-Atlantiques department in south-western France, located at the same time in the former province of Lower Navarre. It borders the municipality of Baztan to the west (Spain, access via the Izpegi Pass).

It is the main access to the Aldudes valley, having nearby the Castle, Echauz Castle, Château d'Etxauz, the river through the place being known as the river Nive des Aldudes.

The town is home to the renowned Day of Navarre (Basque: Nafarroa Eguna), a festival attracting a massive turnout (by thousands) from the Spanish and French side of Navarre in early May intended to strengthen ties between both Navarrese territories and affirming their common Basque identity.

All content from Kiddle encyclopedia articles (including the article images and facts) can be freely used under Attribution-ShareAlike license, unless stated otherwise. Cite this article:
Saint-Étienne-de-Baïgorry Facts for Kids. Kiddle Encyclopedia.