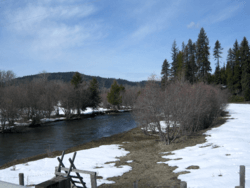 Saint Maries River is a river located in the U.S. state of Idaho. It is a tributary of Coeur d'Alene Lake and thus part of the Spokane River drainage basin and the Columbia River Basin. The West and Middle Forks of the river join near Clarkia, Idaho and run parallel to State Highway 3 in a northwesterly direction to St. Maries. The area is on the eastern edge of the Columbia River Plateau and is to the west of the Bitterroot Mountains. The river's discharge is estimated at 583 cubic feet per second at its mouth in the town of St. Maries Idaho.

All content from Kiddle encyclopedia articles (including the article images and facts) can be freely used under Attribution-ShareAlike license, unless stated otherwise. Cite this article:
Saint Maries River Facts for Kids. Kiddle Encyclopedia.