Salman the Persian facts for kids 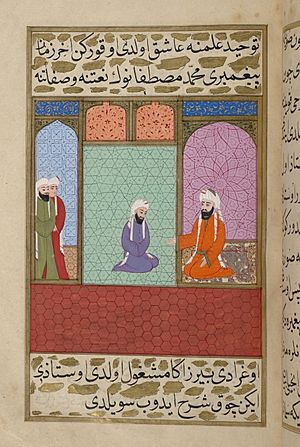 Salman the Persian or Salman al-Farsi (Arabic: سَلْمَان ٱلْفَارِسِيّ‎code: ar is deprecated , Salmān al-Fārisīy), born Roozbeh (Persian: روزبه, "good day"), was a companion of the Islamic prophet Muhammad and the first Persian who converted to Islam. During some of his later meetings with the other Sahabah, he was referred to by the kunya Abu Abdullah ("Father of Abdullah"). He is credited with the suggestion of digging a trench around Medina, a Sasanian military technique when it was attacked by Mecca in the Battle of the Trench. He was raised as a Zoroastrian, then attracted to Christianity, and then converted to Islam after meeting Prophet Muhammad in the city of Yathrib, which later became Medina. According to some traditions, he was appointed as the governor of Al-Mada'in in Iraq. According to popular tradition, Muhammad considered Salman as part of his household (Ahl al-Bayt). He was a renowned follower of Ali ibn Abi Talib after the death of Muhammad. 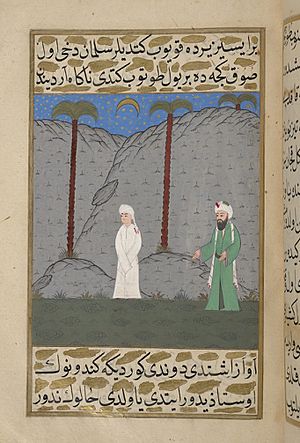 Salmân is expelled from the country by his father when he refuses to practice Zoroastrianism.

Salman al-Farisi was a Persian born with the name Rūzbeh Khoshnudan in the city of Kazerun in Fars Province, or Isfahan in Isfahan Province, Persia. In a hadith, Salman also traced his ancestry to Ramhormoz. The first sixteen years of his life were devoted to studying to become a Zoroastrian magus or priest after which he became the guardian of a fire temple, which was a well-respected job. Three years later in 587 he met a Nestorian Christian group and was impressed by them. Against the wishes of his father, he left his family to join them. His family imprisoned him afterwards to prevent him but he escaped.

He traveled around the Middle East to discuss his ideas with priests, theologians and scholars in his quest for the truth. During his stay in Syria, he heard of Prophet Muhammad, whose coming had been predicted by Salman's last Christian teacher on his deathbed. Afterwards and during his journey to the Arabian Peninsula, he was betrayed and sold to a Jew in Medina. After meeting Muhammad, he recognized the signs that the monk had described to him. He converted to Islam and secured his freedom with the help of Muhammad. Abu Hurairah is said to have referred to Salman as "Abu al-Kitabayn" ("the father of the two books"; that is, the Bible and the Quran) and Ali is said to have referred to him as "Luqman al-Hakeem" ("Luqman the wise," a reference to a wise man mentioned in the Quran).

For more details, see Battle of the Trench 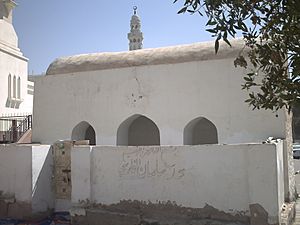 It was Salman who came up with the idea of digging a great trench around the city of Medina to defend the city against the army of 10,000 Arabian non-Muslims. Muhammad and his companions accepted Salman's plan because it was safer and there would be a better chance that the non-Muslim army would have a larger number of casualties.

Salman participated in the conquest of the Sasanian Empire and became the first governor of Sasanid capital after its fall at the time of the second Rashidun Caliph. According to some other sources, however, he disappeared from public life after Muhammad's death; until 656 when Ali became Caliph, and appointed Salman as the governor of Al-Mada'in at the age of 88.

While some sources gather Salman with the Muhajirun, other sources narrate that during the Battle of the Trench, one of Muhajirun stated "Salman is one of us, Muhajirun", but this was challenged by the Muslims of Medina (also known as the Ansar). A lively argument began between the two groups with each of them claiming Salman belonged to their group and not to the other one. Muhammad arrived on the scene and heard the argument. He was amused by the claims but soon put an end to the argument by saying: "Salman is neither Muhajir nor Ansar. He is one of us. He is one of the People of the House." 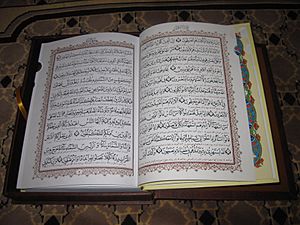 The Quran translated into Persian.

Salman is said to have written the following poem on his enshrouding cotton:

I am heading toward the Munificent, lacking a sound heart and an appropriate provision,
While taking a provision (with you) is the most dreadful deed, if you are going to the Munificent

Salman is also remembered as the barber of Muhammad, inspiring plates in Turkish barber shops with the verse:

Every morning our shop opens with the basmala-,
Hazret-i Salman-i Pak is our pir and our master.

When exactly Salman al-Farsi died is unknown, however it was probably during Uthman ibn Affan's reign or the second year of Ali's reign. One source states that he died in 32 AH/652 or 653 AD in the Julian calendar, while another source says he died during Uthman's era in 35 AH/655 or 656 AD. Other sources state that he died during Ali's reign. His tomb is located in Salman Al-Farsi Mosque in Al-Mada'in, or according to some others in Isfahan, Jerusalem and elsewhere.

Shias, Twelvers in particular, hold Salman in high esteem for a hadith attributed to him, in which all twelve Imāms were mentioned to him by name, from Muhammad.

If anyone wishes to see the real spirit of Islam, he will find it, not in the deeds of the nouveaux riches of Medina, but in the life, character and deeds of such companions of the Apostle of God as Ali ibn Abi Talib, Salman el-Farsi, Abu Dharr el-Ghiffari, Ammar ibn Yasir, Owais Qarni and Bilal. The orientalists will change their assessment of the spirit of Islam if they contemplate it in the austere, pure and sanctified lives of these latter companions.

—Ali Asgher Razwy, A Restatement of the History of Islam and Muslims

Salman is also well known as a prominent figure in Sufi traditions. Sufi orders such as Qadriyya and Bektashiyya and Naqshbandi have Salman in their Isnad of their brotherhood. In the Oveyssi-Shahmaghsoudi order and Naqshbandi order, Salman is the third person in the chain connecting devotees with Muhammad. He also founded Futuwwa along with Ali ibn Abi Talib.

In the Kitáb-i-Íqán, Bahá'u'lláh honours Salman for having been told about the coming of Muhammad:

As to the signs of the invisible heaven, there appeared four men who successively announced unto the people the joyful tidings of the rise of that divine Luminary. Rúz-bih, later named Salmán, was honoured by being in their service. As the end of one of these approached, he would send Rúz-bih unto the other, until the fourth who, feeling his death to be nigh, addressed Rúz-bih saying: 'O Rúz-bih! when thou hast taken up my body and buried it, go to Hijáz for there the Day-star of Muhammad will arise. Happy art thou, for thou, shalt behold His face!'

In Ahmadiyya, Salman the Persian is widely respected to have been given glad tidings with regards to man of Persian origin prophesied in the latter days:

Narrated Abu Huraira: While we were sitting with the Prophet Surat Al-Jumu'a was revealed to him, and when the Verse, "And He (Allah) has sent him (Muhammad) also to other (Muslims).....' (62:3) was recited by the Prophet, I said, "Who are they, O Allah's Apostle?" The Prophet did not reply till I repeated my question thrice. At that time, Salman Al-Farisi was with us. So Allah's Apostle put his hand on Salman, saying, "If Faith were at (the place of) Ath-Thuraiya (Pleiades, the highest star), even then (some men or man from these people (i.e. Salman's folk) would attain it."

All content from Kiddle encyclopedia articles (including the article images and facts) can be freely used under Attribution-ShareAlike license, unless stated otherwise. Cite this article:
Salman the Persian Facts for Kids. Kiddle Encyclopedia.