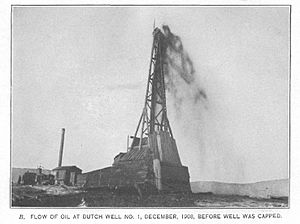 The Salt Creek Oil Field is located in Natrona County, Wyoming. By 1970, more oil had been produced by this field than any other in the Rocky Mountains region and accounted for 20 percent of the total production in Wyoming.

Petroleum seeps in the area were known before 1880, but oil strikes near Lander led to claims by Schoonmaker and Iba. In 1889 the first well to strike oil was drilled in the Shannon pool by Philip M. Shannon, president of the Pennsylvania Oil & Gas Company, who in 1895 built an oil refinery in Casper to process the oil. Dr. Porro, an Italian geologist working for the Dutch company Petroleum Maatschappij Salt Creek in 1906, located the Dutch No. 1 near a large oil seep south of the Shannon wells, which was drilled in 1908. The "gusher" well reached an oil sand after drilling through 1,000 feet (300 m) of shale.

In 1915, a portion of the Teapot Dome was made Naval Petroleum Reserve Number 3.

The field is on an anticline with 1,500 feet (460 m) of closure, which formed in the Late Cretaceous or Early Tertiary. The anticline has two distinct domes, the "Salt Creek Dome" to the north and the "Teapot Dome" to the south. Production is from stratigraphic traps in the Lakota, Sundance and Tensleep formations plus two Frontier Formations, which is an offshore bar sandstone, all of which are interbedded with marine shales. This second Frontier formation extends into the Teapot Dome to the south. The Frontier lies between the Mowry Shale and Niobrara Formation.

In the Salt Creek field Enhanced Oil Recovery with CO2 is used to increase oil production. The CO2 is captured in a natural gas facility in the nearby LaBarge field.

In 2016 CO2 was leaking from an abandoned well in the field and led to the temporary closure of a school.

All content from Kiddle encyclopedia articles (including the article images and facts) can be freely used under Attribution-ShareAlike license, unless stated otherwise. Cite this article:
Salt Creek Oil Field Facts for Kids. Kiddle Encyclopedia.