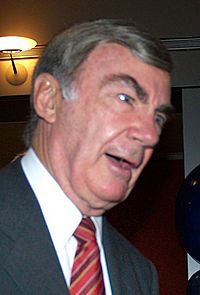 Samuel Andrew Donaldson Jr. (born March 11, 1934) is an American political activist and journalist. He was a former reporter and news anchor, working with ABC News from 1967 to 2013. He is best known as the network's White House Correspondent (1977–1989 and 1998–99) and as a panelist and later co-anchor of the network's Sunday program, This Week.

Donaldson was born in El Paso, Texas. He was a known critic of President Ronald Reagan while he was White House Correspondent.

All content from Kiddle encyclopedia articles (including the article images and facts) can be freely used under Attribution-ShareAlike license, unless stated otherwise. Cite this article:
Sam Donaldson Facts for Kids. Kiddle Encyclopedia.