The San Jose Convention Center opened in 1989, replacing a convention hall of the same name at San Jose Civic (then called the Civic Auditorium). The South Hall opened in 2005, and the main hall was renovated and expanded in 2013. Team San Jose manages the convention center along with several nearby event centers.

The main hall hosts numerous technology conferences and conventions, such as Facebook F8 and Apple Worldwide Developers Conference, while the South Hall has hosted auto shows and political campaign stops. 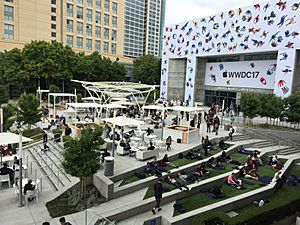 The convention center covers 550,000 square feet (51,000 m2), including 165,000 square feet (15,300 m2) of exhibit space, 31 meeting rooms, and banquet facilities for some 5,000. There are entrances on West San Carlos Street, Almaden Boulevard, and South Market Street. The San Jose Hilton and Marriott hotels both adjoin the convention center. A two-story hallway connecting the three entrances is called the "Parkway" on the ground floor and the "Concourse" on the second floor.

The South Hall, a metal-framed fabric structure, adds another 80,000 square feet (7,400 m2) of exhibit space, for a joint total of 245,000 square feet (22,800 m2). It can accommodate 11,428 people, or 5,333 people with exhibits. It is surrounded by a public parking lot on a 191,668-square-foot (17,806.5 m2) site. City leaders have called for the South Hall's demolition at various times since it was erected in 2005 as a temporary structure; nevertheless, the city considers it important for attracting large events to the convention center. The South Hall and surrounding parking lot are owned by the Successor Agency to the Redevelopment Agency (SARA) of San Jose. The South Hall's maintenance costs $38,000 each year, while demolition is estimated to cost at least $1 million.

In 1957, voters approved a bond measure for the construction of a modern convention center. Construction on Jay McCabe Convention Hall began in December 1952, and the facility opened in 1964 with the Loyal Order of Moose national convention.

Front of San Jose Convention Center as it appeared in 2008

With the opening of the Anaheim Convention Center in 1967, city officials became dissatisfied with Civic Auditorium and McCabe Hall and sought a replacement. Based on a study by Stanford Research Institute in 1970, the city commissioned architect William Hedley and Hellmuth, Obata + Kassabaum to draw up plans for a "Community Plaza" superblock centered around a new convention hall. In October 1973, Mayor Norman Mineta approved $2.4 million for the new convention hall, which would be a wing of Civic Auditorium (now called San Jose Civic), along with an underground parking structure. However, by November 1974, the plans had been downsized to a mere 30,000 square feet (2,800 m2) of exhibit space and an above-ground parking garage. The new San Jose Convention Center broke ground on November 18, 1975, and was dedicated by Mayor Janet Gray Hayes on September 22, 1977. 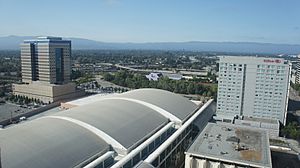 An aerial view of the San Jose Convention Center in 2011.

The convention center's new wing under construction in 2012.

In its early years, the new convention center failed to meet attendance and revenue expectations. By 2002, many Silicon Valley businesses were choosing the much larger Moscone Center in San Francisco over the San Jose Convention Center due to the latter's limited space. A ballot measure to finance an expansion via a hotel tax failed to reach the required two-thirds majority to pass. In June 2005, Team San Jose built the South Hall, a $6.77 million, blue and white tent, adding 80,000 square feet (7,400 m2) of exhibit space.

In 2009, local hotels agreed to a hotel tax increase to fund the convention center's renovation and expansion. On October 10, 2013, the convention center completed the $130 million project, which added 125,000 square feet (11,600 m2) on the site of the former Martin Luther King Jr. Library. The San José Public Library relocated its main branch to the Dr. Martin Luther King Jr. Library on the San Jose State University campus. 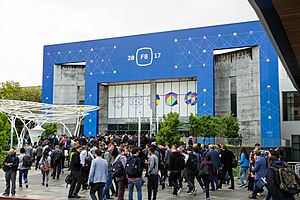 The convention center hosts hundreds of events each year, including the following annual events: 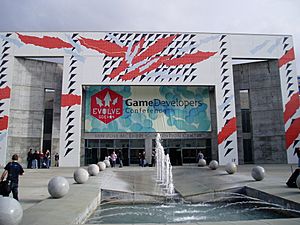 Other notable events at the convention center have included:

All content from Kiddle encyclopedia articles (including the article images and facts) can be freely used under Attribution-ShareAlike license, unless stated otherwise. Cite this article:
San Jose Convention Center Facts for Kids. Kiddle Encyclopedia.