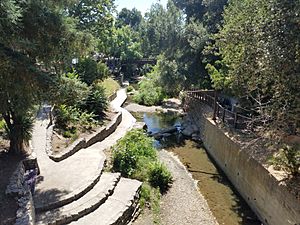 The creek as it flows past the Mission in downtown San Luis Obispo.

San Luis Obispo Creek begins in the Santa Lucia Mountains, at Cuesta Pass in the Los Padres National Forest. It flows south down a steep canyon below the Cuesta Grade of U.S. Highway 101 and turns to the west after receiving Reservoir Canyon Creek from the left. Entering the city of San Luis Obispo it turns southwest, flowing through residential areas and past San Luis Obispo High School. The creek flows in a man-made channel as it approaches downtown west of Johnson Street. At Osos Street it enters a concrete tunnel about 1,000 feet (300 m) long passing beneath downtown San Luis Obispo. After emerging from the tunnel it flows past Mission San Luis Obispo de Tolosa, and then receives Stenner Creek from the right just upstream of Marsh Street.

Below Marsh Street, the creek flows south in a natural channel along the east side of Highway 101, then flows through industrial areas and farmland in the southern part of the city. Near Los Osos Valley Road, it receives Prefumo Creek and Froom Creek from the right, before leaving the city limits of San Luis Obispo. It enters a canyon along the east side of the Irish Hills, receiving the East Fork of San Luis Obispo Creek and Davenport Creek from the left, then turns sharply to the west and receives See Canyon Creek from the right. Approaching its mouth, the creek forms a small estuary before emptying into the Pacific Ocean at San Luis Obispo Bay, just west of Avila Beach.

Various barriers to fish migration have been created on San Luis Obispo Creek and its tributaries, since the city of San Luis Obispo developed. Stage Coach Dam on the upper reaches of the creek was removed in 2002. It had been built in the early 1900s to create a water supply reservoir, but was filled in with sediment. Other barriers have been removed as well, often by creating notches in the middle to concentrate low flows or adding rock weirs to back up the water over an obstacle or provide a more gradual change in elevation.

North American beaver (Castor canadensis) have been thought to be non-native to San Luis Obispo Creek but Bolton recorded in "Anza's California Expeditions" that in April 1774, Father Cavaller of Mission San Luis Obispo de Tolosa gave Juan Bautista de Anza "thirty-odd beaver skins" along with other local gifts including fine Indian baskets and "the skins of eight bears, the animals for which the region was renowned".

All content from Kiddle encyclopedia articles (including the article images and facts) can be freely used under Attribution-ShareAlike license, unless stated otherwise. Cite this article:
San Luis Obispo Creek Facts for Kids. Kiddle Encyclopedia.