Sand Creek Massacre National Historic Site is a National Historic Site in Kiowa County, Colorado, near Eads and Chivington in Kiowa County commemorating the Sand Creek Massacre that occurred here on November 29, 1864. The site is about 170 miles (270 km) southeast of Denver and about 125 miles (200 km) east of Pueblo. A few basic park facilities have been opened at this site.

In 1999, archaeological teams from the National Park Service, Dept. of the Interior BLM, Colorado Historical Society and accompanied by Native American observers, made a major archaeological discovery of remains of the massacre site. Large numbers of period bullets, camp equipment, and other items convinced the NPS that they had found the correct site. Subsequent transfers of ownership from the Dawson family, former owners of the property have left the title of the site to the Cheyenne and Arapaho tribes with management to be undertaken by NPS. The National Park Service offers scheduled Ranger-led programs without charge during hours of operation, from 9 am – 4 pm, April 1 – December 1, or by advance appointment in the winter season. 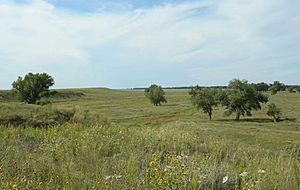 The Historical Site was authorized by Public Law 106-465 on November 7, 2000, in order to "recognize the national significance of the massacre in American history, and its ongoing significance to the Cheyenne and Arapaho people and the descendants of the massacre victims." The law authorized establishment of the site once the National Park Service acquired sufficient land from willing sellers to preserve, commemorate, and interpret the massacre. The site near the junction of County Road 54 and County Road "W" was listed on the National Register of Historic Places on September 28, 2001. On August 2, 2005, President George W. Bush gave final approval for the site. On April 23, 2007 it was announced that site would become America's 391st official park unit with an effective date of April 27, 2007. The dedication ceremony was held on April 28, 2007.

Currently the Site encompasses 12,583 acres (5,092 ha) of which 2,385 acres (965 ha) are federally owned. By 2004 the federal government acquired 920 acres (3.7 km2) from private land owners. On September 9, 2006 the Cheyenne and Arapaho Tribes of Oklahoma conveyed to the United States title to 1,465 acres (6 km2) to be held in trust for the National Historic Site. The site includes 640 acres acquired and preserved by the American Battlefield Trust and its partners.

The site contains a small visitor center, interpretive plaques and signage, monuments located on a hilltop overlooking the massacre site, and two walking trails. The massacre site itself is off-limits to visitors.

All content from Kiddle encyclopedia articles (including the article images and facts) can be freely used under Attribution-ShareAlike license, unless stated otherwise. Cite this article:
Sand Creek Massacre National Historic Site Facts for Kids. Kiddle Encyclopedia.