Sanguinaria canadensis, bloodroot, is a perennial, herbaceous flowering plant native to eastern North America. It is the only species in the genus Sanguinaria, included in the family Papaveraceae, and most closely related to Eomecon of eastern Asia. Products made from sanguinaria extracts, such as black salve, are escharotic and can cause permanent damage. Claims that it can treat cancer and other illness have little support.

Sanguinaria canadensis is also known as Canada puccoon, bloodwort, redroot, red puccoon, and sometimes pauson. It has also been known as tetterwort, although that name is also used to refer to Chelidonium majus. Plants are variable in leaf and flower shape and have in the past been separated out as different subspecies due to these variable shapes. Currently most taxonomic treatments include these different forms in one highly variable species. In bloodroot, the juice is red and poisonous.

The flowers bloom from March to May depending on the region and weather. They have 8–12 delicate white petals, many yellow stamens, and two sepals below the petals, which fall off after the flowers open. Each flower stem is clasped by a leaf as it emerges from the ground. The flowers open when they are in sunlight. They are pollinated by small bees and flies. Seeds develop in green pods 4 to 6 cm (1 1⁄2 to 2 1⁄4 in) long, and ripen before the foliage goes dormant. The seeds are round and black to orange-red when ripe, and have white elaiosomes, which are eaten by ants.

Bloodroot is native to eastern North America from Nova Scotia, Canada southward to Florida, United States, and west to Great Lakes and down the Mississippi embayment.

Sanguinaria canadensis plants are found growing in moist to dry woods and thickets, often on floodplains and near shores or streams on slopes. They grow less frequently in clearings and meadows or on dunes, and are rarely found in disturbed sites. Deer will feed on the plants in early spring.

Bloodroot is one of many plants whose seeds are spread by ants, a process called myrmecochory. The seeds have a fleshy organ called an elaiosome that attracts ants. The ants take the seeds to their nest, where they eat the elaiosomes, and put the seeds in their nest debris, where they are protected until they germinate. They also benefit from growing in a medium made richer by the ant nest debris.

The flowers produce pollen, but no nectar. Various bees and flies visit the flowers looking in vain for nectar, for instance sweat bees in the genera Lasioglossum and Halictus, cuckoo bees in the genus Nomada, small carpenter bees (Ceratina), and bee flies in the genus Bombylius. Some bees come to collect pollen, including mining bees (Andrena), which are the most effective pollinators.

The bitter and toxic leaves and rhizomes are not often eaten by mammalian herbivores. 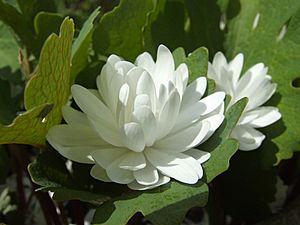 Sanguinaria canadensis is cultivated as an ornamental plant. The double-flowered forms are prized by gardeners for their large showy white flowers, which are produced very early in the gardening season. Bloodroot flower petals are shed within a day or two of pollination, so the flower display is short-lived, but the double forms bloom much longer than the normal forms. The double flowers are made up of stamens that have been changed into petal-like parts, making pollination more difficult.

Bloodroot produces benzylisoquinoline alkaloids, primarily the toxin sanguinarine. The alkaloids are transported to and stored in the rhizome.

Sanguinarine kills animal cells by blocking the action of Na+/K+-ATPase transmembrane proteins. As a result, applying bloodroot to the skin may destroy tissue and lead to the formation of necrotic tissue, called an eschar. Bloodroot and its extracts are thus considered escharotic. Although applying escharotic agents (including bloodroot) to the skin is sometimes suggested as a home treatment for skin cancer, these attempts can be severely disfiguring. Salves, most notably black salve, derived from bloodroot do not remove tumors. Microscopic tumor deposits may remain after visible tumor tissue is burned away, and case reports have shown that in such instances tumor has recurred and/or metastasized.

Internal use is not recommended. An overdose of bloodroot extract can cause vomiting and loss of consciousness.

Bloodroot is a popular red natural dye used by Native American artists, especially among southeastern rivercane basketmakers. A break in the surface of the plant, especially the roots, reveals a reddish sap which can be used as a dye.

All content from Kiddle encyclopedia articles (including the article images and facts) can be freely used under Attribution-ShareAlike license, unless stated otherwise. Cite this article:
Sanguinaria Facts for Kids. Kiddle Encyclopedia.