The Satsop Hills are foothills of the Olympic Mountains in Mason County, Washington north of Matlock, Washington, between Wynoochee Lake to the west and Lake Cushman to the east. 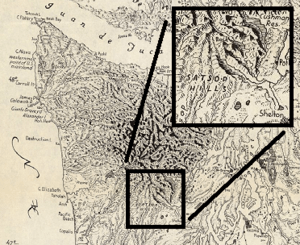 Inset map showing Satsop Hills in context of the Olympic Peninsula. Map by Erwin Raisz in 1941, predating creation of Wynoochee Dam and lake.

The Satsop River, with a 300-square-mile (780 km2) watershed, rises in the hills and flows south to the Chehalis River. Where the river rises, 160 inches (4,100 mm) of annual precipitation qualifies as a temperate rainforest, a term used applied to the Satsop watershed by some publications. The Wynoochee Oxbow meteorological station on the west end of the hills (47°17′57″N 123°39′07″W﻿ / ﻿47.29917°N 123.65194°W﻿ / 47.29917; -123.65194﻿ (Wynoochee Oxbow)) has both the highest average annual rainfall and the second highest ever recorded in the continental United States. The hills lie partly in the Olympic National Forest but not quite in the Olympic National Park. In a 1916 geological survey, hills in the vicinity of Matlock were included with the Black Hills of Thurston County, but may have been describing formations on the East Fork of the Satsop, to the south of the area described above.

Peaks in the Satsop Hills include:

Forest fires have struck the hills repeatedly. The term "Satsop hills" has been used at least since 1885 when the Morning Oregonian used it to describe the location of forest fires.

In September, 1902, "catastrophic" fires burned across Southwest Washington, including a burn from Elma to Shelton on Puget Sound that destroyed one million board feet of lumber at a mill in the hills above Elma, and uncounted volumes of live trees. On September 12, the county seat, Montesano experienced darkness at noon. A one- to two-mile wide swath of timber was completely burned from Elma to Summit Lake, 13 miles west.

Several fire lookouts were built on peaks in the 20th century as listed above as part of a national effort to control fires.

Deer and Roosevelt Elk herds are in the hills, as well as black bear, cougars and game birds including grouse and "the largest population of mountain quail in the state". Elk are probably migratory and move in and out of the Olympic National Park.

Sasquatch are reported to live in the hills, with 22 reported sightings as of 2014, including a case discovered by a sheriff's deputy in 1982 and investigated by an Idaho State University biologist in 2004. 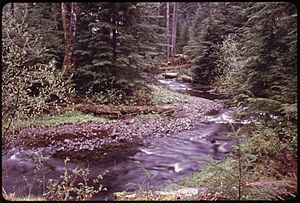 Recreation in the hills includes canoeing and kayaking, camping, fishing, hunting and hiking. Schafer State Park, part of the Washington State Parks system, is on the Satsop River in the low hills at an altitude of 125 feet (38 m); Truman Glick County Park (35 acres (14 ha)) is along the abandoned railroad on the southern side of the hills. Hiking destinations noted in printed and online guides include Satsop Lakes (47°25′25″N 123°30′37″W﻿ / ﻿47.42361°N 123.51028°W﻿ / 47.42361; -123.51028), Spoon Creek Falls, South Mountain, a 3,044-foot (928 m) "moderately well known winter hiking destination" in Mason County, and Vance Creek Bridge, "made famous from millions of Instagram, Facebook, Tumblr and Twitter images" and though on closed private land, was "one of the more popular destinations on the Olympic Peninsula".

All content from Kiddle encyclopedia articles (including the article images and facts) can be freely used under Attribution-ShareAlike license, unless stated otherwise. Cite this article:
Satsop Hills Facts for Kids. Kiddle Encyclopedia.