A sausage sizzle (also referred to as 'sausage in bread' or a sausage sandwich) is a grilled or barbecued food item and community event held in Australia and New Zealand.

A sausage (most commonly beef or pork) is served in sliced bread or a hot dog bun with grilled onions and various condiments, most commonly tomato sauce, barbecue sauce or mustard. Sausage sizzles are often served at community events in Australia and New Zealand, and have become common features in the cultures of both nations. The term "sausage sizzle" came into common use in the 1980s and is used to describe either the food item itself, the barbecuing technique or the nature of the event it may be served at.

Sausage sizzles are generally held either as free community events or as fundraisers for charities, schools, sports clubs and other organisations. As such, ingredients and equipment are cheaply purchased or donated by suppliers. Fundraising sausage sizzles have become particularly associated with elections in Australia and the hardware chain Bunnings Warehouse.

Most commonly, the main sale item at a sausage sizzle is a pork or beef sausage (often referred colloquially in Australian slang as a "snag"), cooked on a grill or barbecue and served on a single slice of white bread, or a hotdog roll in Western Australia. Tomato sauce is the most common accompaniment, and is usually available for no extra cost, though other condiments such as barbecue sauce and American mustard are regularly available. Grilled onions are often available, for free or at extra cost. Some sausage sizzles also offer the option of a white bread roll as an alternative to sliced bread. Vegetarian or gluten free options are infrequently available, but often sold at events with more extensive menus including hamburgers or complete meals. Soft drink cans or bottled water may also be available for purchase, so as to maximise fundraising. 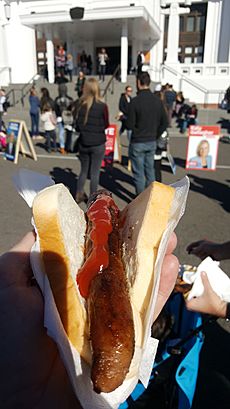 A sausage in bread at a polling booth in front of Old Parliament House, Canberra, during the 2016 federal election

Sausage sizzles have become a recognised and expected addition to polling booths at Australian elections, with sausages at these stations nicknamed 'Democracy Sausages'. There was widespread media coverage of this in 2013 and 2016 Australian Federal Election, with the hashtag '#democracysausage' trending on Twitter. Twitter also added a sausage-in-bread emoji to the '#ausvotes' hashtag on the day of the 2016 election, it was the most widely used emoji in relation to the election under that hashtag. During the 2016 election, the leader of the Australian Labor Party, Bill Shorten came under scrutiny for the way in which he consumed sausage in bread. 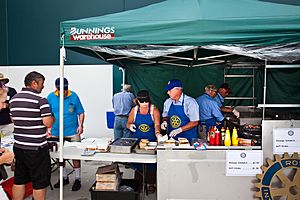 Australian hardware chain Bunnings offers barbecue facilities at all of its stores for hire to community groups. Sausage sizzles at these locations usually occur on weekends and have become associated with the Bunnings brand. In 2016, when Bunnings announced its expansion to the United Kingdom, considerable media coverage was devoted to the question of whether Bunnings would export the tradition, which it subsequently did at some locations.

All content from Kiddle encyclopedia articles (including the article images and facts) can be freely used under Attribution-ShareAlike license, unless stated otherwise. Cite this article:
Sausage sizzle Facts for Kids. Kiddle Encyclopedia.