The Sawtooth Mountains on the Lake Superior shore, looking west by southwest from Grand Marais, Minnesota

The Sawtooth Mountains are a range of hills or small mountains on the North Shore of Lake Superior in the U.S. state of Minnesota, extending about 30 miles (50 km) from Carlton Peak near Tofte on the west, to Grand Marais on the east.

Cross-section of the Lake Superior basin east of the Sawtooths, showing the same tilted strata of volcanic rock which form the mountains.

The Sawtooth Mountains are part of the North Shore Highlands, an area of rugged topography along the North Shore of Lake Superior in central North America. The Sawtooths rise from the lake at angles between 8 and 20 degrees and drop off steeply on their north sides. They received their name as a result of their relatively uniform size, angles, and regularity of spacing; seen from Lake Superior to the east, "the visible crest line thus presents a remarkable profile, resembling the teeth of an immense saw." 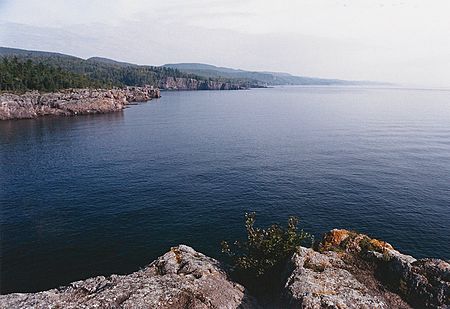 The Sawtooths are home to many mountain peaks, rivers, waterfalls, and parks. Wildlife is abundant in the Sawtooths, including eagles, hawks, deer, moose, and many small mammals. Some of the notable sites include:

Lutsen Mountains Ski Resort is located in the Sawtooths, just northwest of the town of Lutsen; the area includes Moose Mountain, one of the higher peaks of the range, and Eagle Mountain (to be distinguished from the other Eagle Mountain in Cook County, the highest peak in the state, and located well inland from the lakeshore).

All content from Kiddle encyclopedia articles (including the article images and facts) can be freely used under Attribution-ShareAlike license, unless stated otherwise. Cite this article:
Sawtooth Mountains (Minnesota) Facts for Kids. Kiddle Encyclopedia.