Scotland is an unincorporated community and census-designated place (CDP) in Taylor Township, Greene County, Indiana, United States. As of the 2010 census it had a population of 134. 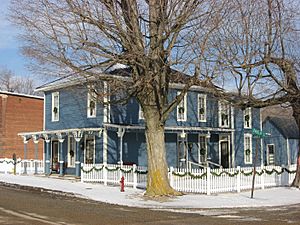 The Scotland Hotel, a community landmark

The Scotland post office was established in 1837. A majority of the early settlers were natives of the country of Scotland.

The Scotland Hotel was listed on the National Register of Historic Places in 1993.

According to the U.S. Census Bureau, the Scotland CDP has a total area of 0.58 square miles (1.5 km2), all of it land. It is situated on high ground to the south of Doans Creek, a west-flowing tributary of the White River and part of the Wabash River watershed.

All content from Kiddle encyclopedia articles (including the article images and facts) can be freely used under Attribution-ShareAlike license, unless stated otherwise. Cite this article:
Scotland, Indiana Facts for Kids. Kiddle Encyclopedia.