Scranton is a city in Greene County, Iowa, United States. The population was 511 at the time of the 2020 census. It was named after Scranton, Pennsylvania.

Scranton was platted in 1869, shortly after the Cedar Rapids & Missouri River Railroad was built through that territory. It was named for Joseph H. Scranton from Scranton, Pennsylvania. Scranton was incorporated in 1880.

Scranton's water tower, built in 1897, is the oldest working water tower in Iowa and 9th oldest in the United States. A fire occurred at the tower in 1907, initially started to melt ice that had caused the town to be without water. Three men were injured attempting to put the fire out, although the tower itself did not suffer any major damage.

According to the United States Census Bureau, the city has a total area of 1.88 square miles (4.87 km2), all of it land.

There were 238 households, of which 26.5% had children under the age of 18 living with them, 50.8% were married couples living together, 5.0% had a female householder with no husband present, 4.2% had a male householder with no wife present, and 39.9% were non-families. 34.5% of all households were made up of individuals, and 12.2% had someone living alone who was 65 years of age or older. The average household size was 2.34 and the average family size was 3.06.

Annual events in Scranton include the Mid-Summer Festival, held in July, and a Christmas celebration.

Every 5 years the town holds an all school reunion. Next reunion will be in 2015.

Scranton formerly had a public school building of its own, which had a three-story section built in 1915. The school closed in 2008; the school district had notified the city government in 2006 so the city could plan for the future of the school. In 2010 the city government acquired the building, paying $1 for it, and converted it into a community center; the city government considered converting the school facility into an apartment block, but it determined it would have required too much money. The city government determined that it could not find a purpose for the 1913 section; therefore its razing occurred in 2012. The current Greene County district, as of 2014, rented the school gymnasium for athletic meetups. 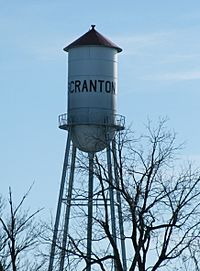 All content from Kiddle encyclopedia articles (including the article images and facts) can be freely used under Attribution-ShareAlike license, unless stated otherwise. Cite this article:
Scranton, Iowa Facts for Kids. Kiddle Encyclopedia.