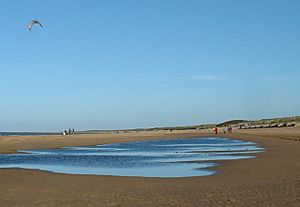 Seahenge, which is also known as Holme I, was a prehistoric monument located in the village of Holme-next-the-Sea, near Old Hunstanton in the English county of Norfolk. A timber circle with an upturned tree root in the centre, Seahenge was apparently built in the 21st century BC, during the early Bronze Age in Britain. Contemporary theory is that it was used for ritual purposes.

The site consisted of an outer ring comprising fifty-five small split oak trunks forming a roughly circular enclosure around 7 by 6 metres (23 by 20 ft). Rather than being placed in individual holes, the timbers had been arranged around a circular construction trench. Their split sides faced inwards and their bark faced outwards (with one exception where the opposite is the case). One of the trunks on the south western side had a narrow Y fork in it, permitting access to the central area. Another post had been placed outside this entrance, which would have prevented anyone from seeing inside. The timbers were set in ground to a depth of 1-metre (3 ft 3 in) from the contemporary surface although how far they originally extended upwards is not known. In the centre of the ring was a large inverted oak stump.

Although the structure's existence had been common knowledge amongst locals for several decades, Seahenge received its name from the press in 1998, who named it after the more famous prehistoric structure Stonehenge in Wiltshire, and was picked up by the local and national media, inducing a great deal of publicity around its excavation. This was only increased due to the protests held against the excavation by both locals, who wanted it to remain as a tourist site, and Neopagans, who believed that the removal of the structure was an insult to the religious beliefs of its original builders, among other concerns.

Seahenge was constructed during the Early Bronze Age, a period of time that saw the increasing adoption of agriculture and sedentary living in Britain. Those constructing the monument made use of at least fifty different bronze axes, which were used to shape the timber to the desired lengths and shapes, at a time when, archaeologists believe, bronze tools were still relatively rare and had only been introduced to Britain a few centuries before.

Using a variety of scientific techniques, archaeologists have come to the conclusion that the trees used in the construction of the monument had all been felled in the same year, 2049 BC, whilst the condition of the sapwood indicated that it had been cut down in spring or early summer. According to writer Charlie Watson, "Confirming that all the trees had been felled at the same time suggested strongly that the building of the circle was a single event. Further, a great amount of work would have been involved in felling, transporting, preparing and erecting the timbers, so it was likely too that the job was done by a large number of people - possibly an entire community or an extended family - working together."

Seahenge was originally constructed on a salt marsh, and over the centuries the area became a freshwater wetland, as an offshore barrier grew up, preventing sea water from getting access to the area around the circle. This in turn allowed alder trees to grow in the area, which eventually created a layer of peat above the mudflats. With rising sea levels in later millennia, the sea advanced, and eventually sand began to cover the peat. Through this process, Seahenge eventually found itself from once being inland to being on the beach, where it was revealed by the eroding away of the sand and peat by the late 20th century, four thousand years since its original construction.

Researchers were unable to determine activity at Seahenge in the centuries after it was built, and its purpose is consequently unknown. However, the presence of Middle and Late Bronze Age pottery at the site suggests that it became a focal point again several centuries after construction. Theories about the site have focused on the idea of inversion, as represented by the upside-down central tree stump and the single post turned 180 degrees from the others within the circle itself. The theme of inversion has been noticed in some Early Bronze Age burials. Not all the split posts can be accounted for and it has been suggested that another structure was built nearby using them.

Seahenge is so named by analogy with Stonehenge and does not possess an extant henge and appears to have had little functionally in common with its namesake. The contemporary ground surface associated with the monument has long since been washed away meaning no associated features survive and the silt Seahenge stood in when found considerably postdates the timber circle. One theory of use is that Seahenge was a mortuary enclosure for the use of excarnation rather than a henge. In view of the relatively small diameter of the post circle and its height and its " privacy" entrance, some have suggested it is a "Sky Burial", (excarnation) site as found in Tibet, Mongolia & North America. There is no direct evidence for this.

In early Spring, 1998, John Lorimer, a special-needs worker, amateur archaeologist and beach comber, was catching shrimps with his brother-in-law Gary on Holme beach. The pair found a Bronze Age axe head in the silt, but at first did not know what it was. Intrigued, Lorimer visited the area repeatedly, eventually finding a lone tree stump that had been unearthed on the beach, unusual in that it seemed to be upside down. A metal detectorist friend later recognised the site's importance, so they contacted the Castle Museum in Norwich. Archaeologists at the museum examined the axe head, the second one found on Holme Beach within only a few months. Lorimer continued to monitor the inverted tree stump. Wave erosion gradually exposed a surrounding ring of wooden posts, confirming that the site was an intentional human construction. Lorimer contacted Castle Museum again.

The museum contacted Edwin Rose, at the time Norfolk Landscape Archaeology's Development Control Officer, who then visited the site with Lorimer on 12 August 1998. At first, Rose suspected it was a fish trap from the Anglo-Saxon period, relatively commonplace for the area. But he began to suspect that it might be something else. So Rose inquired whether English Heritage would fund an excavation. They agreed.

With Seahenge excavated, the timbers that it had been built out of were transported fifty miles away to the Fenland Archaeology Trust's field centre at Flag Fen in Cambridgeshire, where it immediately underwent conservation by being immersed in fresh water. The timbers were then cleaned of attached mud and placed in permanent storage. English Heritage employed laser scan technology (developed by Alistair Carty of Archaeoptics) to precisely image timbers in three dimensions, allowing archaeologists to create a virtual model of the whole site.

At Flag Fen, it was then continually soaked in wax-emulsified water to slowly (over years) replace the moisture in the wood with wax. It was later transferred to Portsmouth where maritime archaeology experts at the Mary Rose Trust continued the programme at their purpose-built site. Conservation work is complete, with a recreated Seahenge near its original site, at the Lynn Museum in King's Lynn and opened to the public in April 2008.

One hundred metres east, another older ring has been found, consisting of two concentric timber circles surrounding a hurdle lined pit containing two oak logs. Known as Holme II, it dates to the centuries before Holme I (c. 2400-2030 BC) although the two sites may have been in use together. Although also threatened with destruction by the sea, this site has been left in situ and exposed to the tidal actions of the sea. Some have suggested that this decision by English Heritage relates to the controversy over digging Holme I.

Seahenge provides the inspiration for a timber circle depicted in Catherine Fisher's 2005 novel Darkhenge. Fisher discusses a prehistoric monument featuring an upturned oak tree surrounded by 24 timbers, each symbolising one of the characters of the ogham tree alphabet. This circle, known as Darkhenge, is described as being located at Avebury in Wiltshire and is portrayed as being the portal to Annwyn, the underworld of Welsh mythology.

Seahenge can be visited in the 2020 video game Assassin's Creed: Valhalla.

All content from Kiddle encyclopedia articles (including the article images and facts) can be freely used under Attribution-ShareAlike license, unless stated otherwise. Cite this article:
Seahenge Facts for Kids. Kiddle Encyclopedia.