Selworthy Beacon is a hill and Marilyn of Exmoor in Somerset, England. It lies within the boundaries of Exmoor National Park, to the north of the village of Selworthy and northwest of Minehead. A road leads to the top, where there is a National Trust plaque and a view of the south coast of Wales across the Bristol Channel. The South West Coast Path also climbs the hill and ends slightly shy of the summit.

Selworthy Beacon is located in northern Somerset in southwestern England, about 4 miles (6 km) northwest of Minehead, north of the village of Selworthy. Selworthy Beacon is one of three peaks in Somerset, the other two being Dunkery Beacon and Periton Hill. Its elevation is 1,013 feet (309 m). Behind the hill, there are precipitous cliffs. Selworthy Beacon is situated within the National Trust-owned Holnicote Estate. Nearby are the Macmillan Way, Coleridge Way, and a fourteenth-century tithe barn. A signposted walking route to the hill goes through a wooded area of Allerford and Holnicote Plantations, and is 2 miles (3 km) northeast of Porlock. 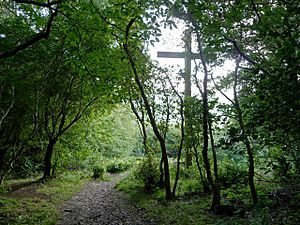 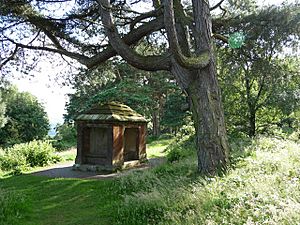 Near the summit are a series of cairns, thought to be the remains of round barrows, and the British Iron Age Bury Castle. The round cairns have been scheduled as an ancient monument. In the sixteenth century, Selworthy Beacon was (as its name implies) the site of a beacon to warn of impending invasions. The mausoleum of Sir Thomas Dyke Acland is located about 0.25 miles (400 m) from Selworthy Beacon.

Exmoor coastline is part of the Exmoor National Park (area 267 square miles (690 km2)) and Selworthy Beacon is on Exmoor’s stiff eastern slopes. It is approached from Porlock via Allerford. Typical coastal plants are present, such as Sea Campion and Thrift (Armeria maritima), as well as gorse and heather (Calluna vulgaris).

All content from Kiddle encyclopedia articles (including the article images and facts) can be freely used under Attribution-ShareAlike license, unless stated otherwise. Cite this article:
Selworthy Beacon Facts for Kids. Kiddle Encyclopedia.