Seminoe Dam is a concrete thick-arch dam on the North Platte River in the U.S. state of Wyoming. The dam stores water for irrigation and hydroelectricity generation, and is owned and operated by the U.S. Bureau of Reclamation. It is the uppermost dam on the North Platte River and is located directly upstream from the Kortes Dam. It lies in a narrow, isolated canyon formed by the North Platte cutting through the Seminoe Mountains about 40 miles (64 km) northeast of Rawlins. The 295-foot (90 m) dam forms Seminoe Reservoir, which covers more than 20,000 acres (8,100 ha) when full. Seminoe State Park is adjacent to the reservoir. The small village of Seminoe Dam abuts the dam and reservoir, and provides residence for the dam attendants and park services personnel.

This dam was first proposed in the 1930s as part of the Bureau of Reclamation's Kendrick Project, which would regulate the flow of the North Platte River in order to improve agriculture in the valleys surrounding Casper, Wyoming. Originally known as the Casper-Alcova Project, it was authorized by the National Industrial Recovery Act on June 16, 1933 in response to the Great Depression. The project was renamed the Kendrick Project on August 9, 1937 in honor of Wyoming politician John B. Kendrick. 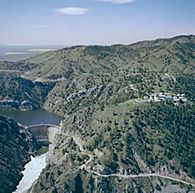 Seminoe Dam and Reservoir from the air

In 1934, Winston Brothers Company and Associates won the construction contract of Seminoe Dam. Groundbreaking of the site was on February 20, 1936, with preliminary blasting and excavations. The diversion tunnel for the North Platte was completed on January 17, 1937, with one fatality, and by May of that year, a cofferdam was completed to a sufficient height to divert the river into the new channel. Concrete pouring began on January 19, 1938, and the last bucket was emptied on December 21, 1938. Water storage began on April 2, 1939, when the outlet tunnels were closed. The dam's power station was finished and the entire project was declared operational on August 3, 1939. A total of two deaths and several serious injuries resulted from the construction, and a pair of active faults that cut across the canyon near the dam site had to be excavated and filled in.

The dam is suffering from a degrading Alkali–silica reaction that has damaged its structural integrity.

The Seminoe Reservoir is stocked with fish by the Wyoming Game and Fish Commission, and is open to boating and fishing, although access to the shoreline is limited and sometimes difficult due to the lack of development and distance from major cities.

All content from Kiddle encyclopedia articles (including the article images and facts) can be freely used under Attribution-ShareAlike license, unless stated otherwise. Cite this article:
Seminoe Dam Facts for Kids. Kiddle Encyclopedia.