Sergei Alexandrovich Belov (Russian: Серге́й Алекса́ндрович Бело́в; January 23, 1944 – October 3, 2013) was a professional basketball player, most noted for playing for CSKA Moscow and the senior Soviet Union national basketball team. He is considered to be one of the best European basketball players of all time, and was given the honor of lighting the Olympic Cauldron with the Olympic flame during the 1980 Summer Olympics opening ceremony, in Moscow.

Sergei Belov was born in the village of Nashchyokovo, Shegarsky District, Tomsk Oblast, Soviet Union. In 1968, he became an Honored Master of Sports of the USSR. He became an Honored Coach of Russia in 1995, and served as President of the Russian Basketball Federation (1993–98). 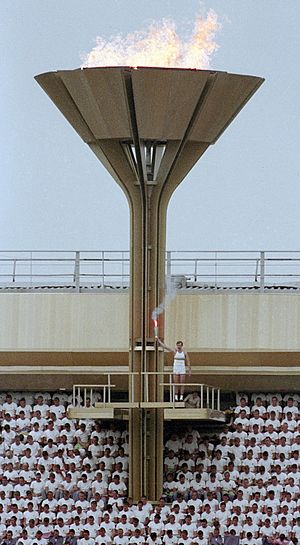 Belov lighting the Olympic Cauldron during the 22nd Olympics opening ceremony in Moscow, 1980

In the gold medal game of the 1972 Summer Olympics, Belov scored 20 points against the United States national basketball team, as the Soviet Union controversially defeated the USA, by a score of 51–50, to win the gold.

All content from Kiddle encyclopedia articles (including the article images and facts) can be freely used under Attribution-ShareAlike license, unless stated otherwise. Cite this article:
Sergei Belov Facts for Kids. Kiddle Encyclopedia.