The Seven Wise Masters (also called the Seven Sages or Seven Wise Men) is a cycle of stories of Sanskrit, Persian or Hebrew origins. 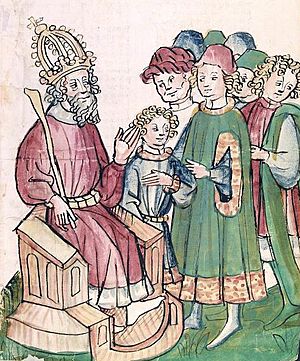 The Sultan sends his son, the young Prince, to be educated away from the court in the seven liberal arts by Seven Wise Masters. On his return to court, his stepmother, the empress, attempts to seduce him. To avert danger he is bound over to a week's silence by Sindibad, leader of the Seven Wise Masters. During this time, the empress accuses him to her husband, and seeks to bring about his death by seven stories which she relates to the emperor; but her narrative is each time confuted by the Seven Wise Masters led by Sindibad. Finally the prince's lips are unsealed, the truth exposed, and the wicked empress is executed.

The frame narrative served as the flexible way to transmit tales to other listeners.

The cycle of stories, which appears in many European languages, is of Eastern origin. An analogous collection occurs in Sanskrit, attributed to the Indian philosopher Syntipas in the first century BC, though the Indian original is unknown. Other suggested origins are Persian (since the earliest surviving texts are in Persian) and Hebrew (a culture with similar tales, such as that of the biblical Joseph).

The collection later supplied tales that circulated in both oral and written traditions. Giovanni Boccaccio used many of them for his famous work, the Decameron.

The Latin romance was frequently printed in the 15th century, and Wynkyn de Worde printed an English version about 1515. See:

The Seven Sages Society, founded in 1975, maintains a perpetual scholarly bibliography, with annual updates in its on-line and printed (free of charge) Newsletter, at <http://sevensagessociety.org>.

The tale collection has been thought to contain the origins of the Aarne-Thompson-Uther tale type ATU 671, "The Three Languages". The story tells of a commoner boy who can understand the language of animals, which converse among themselves that the boy will lord over their mother and father in the future. His parents expel him for such affront. After a series of adventures, the boy becomes a king or pope and returns to his family's house. His parents serve him with a water and a towel and he reveals his identity.

All content from Kiddle encyclopedia articles (including the article images and facts) can be freely used under Attribution-ShareAlike license, unless stated otherwise. Cite this article:
Seven Wise Masters Facts for Kids. Kiddle Encyclopedia.