The current Shamrock building is a major landmark of Bendigo and is of historic and architectural significance to the nation of Australia as a significant building and to the state of Victoria as part of a significant streetscape and collection of late Victorian buildings in a similar style. 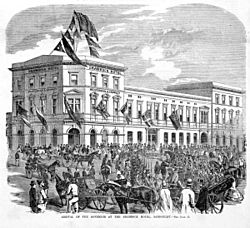 The Shamrock began life in 1854, as a small hotel known as The Exchange Hotel, servicing miners during the Victorian gold rush including a Cobb and Co. office and a concert hall known as the Theatre Royal.

The hotel's patronage had grown quickly with the booming goldfields and it was renamed the Shamrock in 1855. The same year the Theatre Royal hosted to Lola Montez, performing for the diggers who threw gold nuggets at her feet, many of which the Shamrock staff took as tips while cleaning. The Bendigo Shakespeare and Literary Society also performed at the theatre from 1861.

Completely rebuilt in 1864, the Shamrock became a large hotel with two triple storey palazzo in the Victorian Regency architecture style. By this time the Shamrock had become main hotel in central Sandhurst (as Bendigo was then known) and was the accommodation of choice of visiting dignitaries to the valley's goldfields district including governor Charles Henry Darling.

A large double storey verandah was added in the 1870s.

In 1897 the hotel was once again completely rebuilt to the design of Phillip Kennedy, an understudy of German migrant architect William Charles Vahland, who is attributed to the four-storey Second Empire architecture design with basement level and a distinctive tall fifth storey mansard roof. The elaborate "boom style" building features detailed stucco mouldings and a distinctively Australia feature in its Victorian Filigree styled double storey wrap around iron lacework verandah. The entry patio has the hotel's name in mosaic parquetry and the hotel's name is also etched into the glass of the transom light. Part of the ambitious brief was to construct a rival in grandeur to Melbourne's the Grand Hotel (now Windsor Hotel). The construction contractors were Baxter and Boyne.

The Shamrock played a role in the History of Australia when in 1898 it hosted the Australian Natives' Association at the banquet hall in which Alfred Deakin made a speech in support for the Federation of Australia.

Dame Nellie Melba was one of the notable guests of the hotel during the Edwardian era, she stayed in the third floor corner suite opposite the Bendigo Post Office clock tower and demanded its hourly chime be turned off.

In the 1970s the Shamrock, like many grand hotels around Australia, had waned in popularity and was under threat of demolition as one of several sites in being proposed for speculative office blocks. The Rupert Hamer government stepped in, acquiring the hotel for $240,000 to save it and nominated it of state heritage significance. 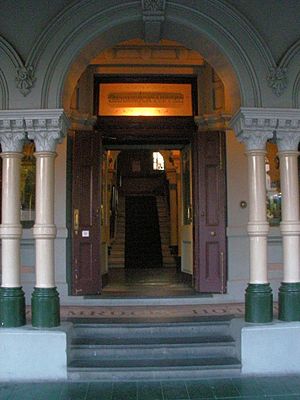 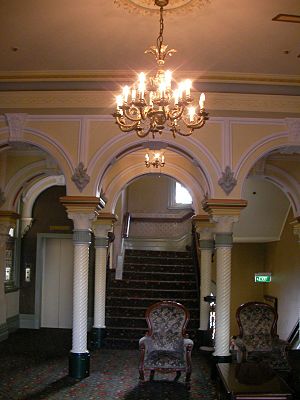 The Victorian Public Works Department subsequently undertook a major restoration project at a cost of approximately $2.5 million which was finally completed on 14 April 1981. While many historic interior features were intact including the grand staircase, verandah, second storey parlour, halls and arches and 1920s elevator most of the rooms were upgraded with modern facilities and the top storey beneath the mansard roof, which were subject to water ingress and pigeon roosting was boarded off and the basement level was closed. The hotel was leased to Clover Hotels.

Among the high-profile guests after the reopening were Charles, Prince of Wales and Diana, Princess of Wales during a royal visit in 1983.

The Shamrock is privately operated and part of the Comfort Inn brand until recently. It remains one of Bendigo's most popular venue for functions and photography, particularly wedding receptions.

The Shamrock was given a state interim heritage protection order in 1975. The hotel was recognised with national significance to Australia in 1978 when it was added to the Register of the National Estate (4298).

All content from Kiddle encyclopedia articles (including the article images and facts) can be freely used under Attribution-ShareAlike license, unless stated otherwise. Cite this article:
Shamrock Hotel, Bendigo Facts for Kids. Kiddle Encyclopedia.