Sharon Hampson, Lois Lilienstein, and Bram Morrison began their singing careers as individuals, and met while performing for the "Mariposa in the Schools" program. The three performers quickly discovered that they shared a common philosophy about creating quality music for people of all ages.

In 1978, with $20,000 borrowed from family and friends, they recorded their first album One Elephant, Deux Éléphants, released by Elephant Records and distributed by A&M. The folk-style album, with its eclectic musical mix, became one of the fastest-selling children's albums ever produced in Canada.

Producer Bill Usher contributed to their singing style. Usher was looking for a more energetic twist to children's music and a shift away from the previous traditional folk style. He sought out songs that drew upon various musical styles, such as rock'n roll, Broadway, and calypso. Sharon, Lois & Bram's appeal crossed a variety of demographics.

During the 1980s, the trio starred in The Elephant Show on CBC. The series was later aired in reruns on the U.S. cable network Nickelodeon, through 1996. Each 30-minute installment featured episode-length storylines, in addition to songs and sketches, featuring the trio alongside a human-sized elephant puppet, and children's entertainer, Eric Nagler. Special guests, which included Louis Del Grande, Jayne Eastwood, Andrea Martin, Kate and Anna McGarrigle, Murray McLauchlan, Ann Mortifee, Fred Penner, Jan Rubeš, Sneezy Waters, The Nylons, The Shuffle Demons, and many more, also appeared on each 30-minute episode. A second series, titled Skinnamarink TV, featured a different format and two new puppet characters. The series ran for 52 episodes on the CBC in Canada and The Learning Channel in the United States from 1997 to 1999.

In 1995, the trio was asked by a collective of Western Canada planetariums to produce a "Laser Sharon, Lois & Bram" multi-media presentation, so that children could be introduced at an early age to the solar system, by way of education through entertainment. Make A Wish with Sharon, Lois & Bram premiered in June 1995 for extended runs in Vancouver's H. R. MacMillan Space Centre and Toronto's McLaughlin Planetarium. Also, in 1995, the song "Old John Braddelum", from their album, One Elephant, Deux Éléphants (1978), appeared in the feature-film Billy Madison starring Adam Sandler.

In 2000, following her husband's death, Lilienstein retired from touring with the group, which from that point on often performed as Sharon, Bram & Friends, with "friends" referring to life-size animal puppets. Lilienstein continued to play benefit shows and record with the group. The duo continued to tour and are currently represented by Jeff Andrusyk at JMA Talent.

In 2005, Bram announced that he had been found to have a benign tumor which was causing deafness in one ear. He underwent an experimental procedure to prevent further hearing loss.

On May 4, 2008, Sharon, Lois & Bram reunited on stage at the Toronto Jewish Film Festival, for a rare performance featuring all three singers and a viewing of 25 Years of Skinnamarink.

On May 10, 2014, the "Sharon, Lois & Bram Playground" was dedicated at June Rowlands Park in midtown Toronto. The playground naming was originally proposed by Toronto Councillor Josh Matlow. The ceremony was attended by roughly 2,000 people and included a welcome by Matlow, followed by several musical numbers by Sharon, Lois & Bram and short words of congratulations from various key individuals throughout the trio's career. The ceremony concluded with the unveiling of an elephant-shaped park sign. 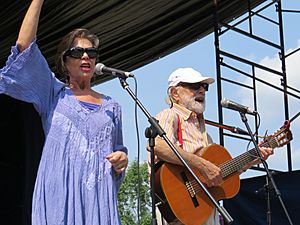 Sharon and Bram on stage at the 2017 Peterborough Folk Festival

Lois Lilienstein (born Lois Ada Goldberg on July 10, 1936, in Chicago) died on April 22, 2015, aged 78, at her home in Toronto. According to her son David, the cause of death was endometrial cancer. In addition to David, Lilienstein is survived by her granddaughter, Tessa.

Since Lilienstein's death, Hampson and Morrison have continued to perform as Sharon & Bram. In 2018, Sharon & Bram announced a farewell tour.

In May 2019, a children's picture book based on the group's hit song, "Skinnamarink" was announced for a September 2019 release.

In April 2020, a Sharon, Lois & Bram YouTube channel launched with Sharon's Great Big Life, a new YouTube series premiering on April 7. The show features Sharon reminiscing about her life on tour, such as filming The Elephant Show and Skinnamarink TV, and each weekly episode will include previously-unseen photos and videos, and a look at Sharon's current life in Toronto. A trailer to promote the web series was released prior to the launch of the show. Season 1 will include 8 episodes.

In 1996, Sharon, Lois, and Bram each received an Honorary Degree of Doctor of Humane Letters (DHL) from Mount Saint Vincent University in Halifax, Nova Scotia.

In 2002, the three were made members of the Order of Canada. The Chicago-born Lois was named an Honourary Member of the Order, as a non-Canadian. Video of the ceremony appears on the 25-year anniversary movie 25 Years of Skinnamarink.

In October 2009, the trio received the Estelle Klein Award from the Ontario Council of Folk Festivals (OCFF) for their significant contributions to Ontario's folk music community. The event weekend included a short video presentation of their life's work and an interview by Richard Flohil.