The Shivwits Plateau is named for the Shivwits section of the Paiute Indian tribes. The plateau is also one of the major areas of the Grand Canyon-Parashant National Monument that is bordered by the Lake Mead National Recreation Area (west), the Hualapai Indian Reservation (southeast), and Grand Canyon National Park (east).

The southwest, south, and southeast around the plateau is composed of the Hualapai Indian Reservation along the course of the Colorado River, the section named the Lower Granite Gorge. The north section is enclosed within Grand Canyon National Park and the Grand Canyon-Parashant National Monument.

The Hurricane Cliffs are on the east and the Grand Wash Cliffs are at the west. 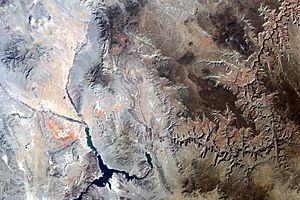 View from space: The excursion of the Colorado River around the Shivwits Plateau. (about 50-mi from Lake Mead)

All content from Kiddle encyclopedia articles (including the article images and facts) can be freely used under Attribution-ShareAlike license, unless stated otherwise. Cite this article:
Shivwits Plateau Facts for Kids. Kiddle Encyclopedia.