The Hualapai (pronounced Wa-la-pie) is a federally recognized Indian tribe in Arizona with over 2300 enrolled members. Approximately 1353 enrolled members reside on the Hualapai Indian reservation, which spans over three counties in Northern Arizona (Coconino, Yavapai, and Mohave).

The name, meaning "people of the tall trees", is derived from hwa:l, the Hualapai word for ponderosa pine and pai “people”. Their traditional territory is a 108-mile (174 km) stretch along the pine-clad southern side of the Grand Canyon and the Colorado River with the tribal capital located at Peach Springs.

The Hualapai language is a Pai branch of the Yuman–Cochimí languages, also spoken by the closely related Havasupai, and more distantly to Yavapai people. It is still spoken by most people over 30 on the Reservation as well as many young people. The Peach Springs School District runs a successful bilingual program for all local students, both Hualapai and non-Hualapai, in addition to immersion camps. 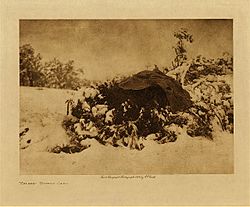 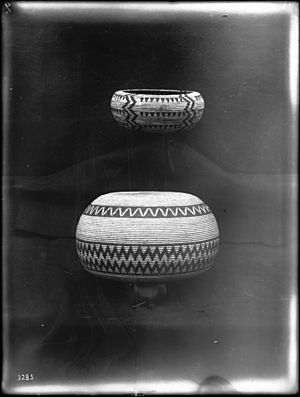 Major traditional ceremonies of the Hualapai include the "Maturity" ceremony and the "Mourning" ceremony. Nowadays the modern Sobriety Festival is also celebrated in June.

The souls of the dead are believed to go northwestward to a beautiful land where plentiful harvest grow. This land is believed to be seen only by Hualapai spirits.

The Hualapai Reservation was created by executive order in 1883 on lands that just four regional bands considered as part of their home range, like the Yi Kwat Pa'a (Iquad Ba:' – “Peach Springs band”) or Ha'kasa Pa'a (Hak saha Ba:' - “Pine Springs band”). The other Hualapai regional bands (including the Havasupai) lived far away from the current reservation land.

The Hualapai War (1865–1870) was caused by an increase in traffic through the area on the Fort Mojave-Prescott Toll Road which elevated tensions and produced armed conflicts between the Hualapai and European Americans. The war broke out in May 1865, when the Hualapai leader Anasa was killed by a man named Hundertinark in the area of Camp Willow Grove and in March 1866. In response, a man named Clower was killed by the Hualapai, who also closed the route from Prescott, Arizona to the Colorado River ports due to the conflict. The most important and principal Hualapai leaders (called Tokoomhet or Tokumhet) at that time were: Wauba Yuba (Wauba Yuma of the Yavapai Fighters subtribe), Sherum (Shrum or Cherum of the Ha Emete Pa'a i.e. “Cerbat Mountain band” of the Middle Mountain People subtribe), Hitchi Hitchi (Hitchie-Hitchie of the Plateau People subtribe) and Susquatama (Sudjikwo'dime, better known by his nickname Hualapai Charley, Hualapai Charlie, Walapai Charley or Walapai Charlie of the Middle Mountain People subtribe). It was not until William Hardy and the Hualapai leaders negotiated a peace agreement at Beale Springs that the raids and the fighting subsided. However, the agreement lasted only nine months when it was broken with the murder of Chief Wauba Yuba near present-day Kingman during a dispute with the Walker party over the treaty.

After the chief's murder, raids by the Hualapai began in full force on mining camps and settlers. The cavalry from Fort Mojave responded, with the assistance of the Mohave, by attacking Hualapai rancherias and razing them. The pivotal engagement took place in January 1868, when Captain S.B.M. Young, later joined in by Lt. Johnathan D. Stevenson, surprised the rancheria of Sherum with his more than one hundred warriors. Known as the Battle of Cherum Peak, it lasted all day. Stevenson fell in the first volley. The Hualapai managed to escape, but lost twenty-one warriors, with many more wounded. The Battle broke the military resistance of the Hualapai. The Hualapai began to surrender, as whooping cough and dysentery weakened their ranks, on August 20, 1868. They were led by Chief Leve Leve (Levi-Levi, half-brother to Sherum and Hualapai Charley) of the Amat Whala Pa'a (Mad hwa:la Ba:' - “Hualapai Mountains band”) of the Yavapai Fighters subtribe. The warrior Sherum, who was known for his tenacity as a warrior, later surrendered, thus marking the end of the Hualapai Wars in 1870. It is estimated that one-third of the Hualapai people were killed during this war either by the conflict or disease. 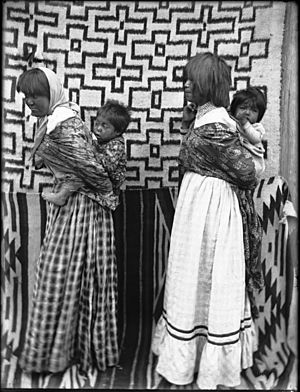 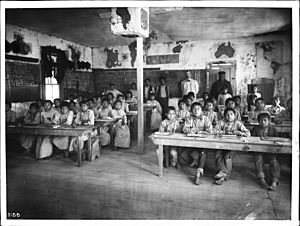 Ethnically, the Havasupai and the Hualapai are one people, although today, they are politically separate groups as the result of U.S. government policy. The Hualapai (Pa'a or Pai) had three subtribes - the Middle Mountain People in the northwest, Plateau People in the east, and Yavapai Fighter in the south (McGuire; 1983). The subtribes were divided into seven bands (Kroeber; 1935, Manners; 1974), which themselves were broken up into thirteen (original fourteen) regional bands or local groups (Dobyns and Euler; 1970). The local groups were composed of several extended family groups, living in small villages: The Havasupai were one band of the Plateau People subtribe.

Plateau People (Ko'audva Kopaya) (included seven bands in the plateau and canyon country east of the Grand Wash Cliffs, the eastern Hualapai Valley, this area include the current Hualapai Reservation, bands listed from west to east)

Middle Mountain People (Witoov Mi'uka Pa'a) (lived west of the Plateau People subtribe, ranged over the Cerbat and Black Mountains and portions of the Hualapai, Detrital, and Sacramento Valleys)

Yavapai Fighters (occupied the southern half of the Hualapai country and were the first to fight the enemy Yavapai - called by the Hualapai Ji'wha', “The Enemy” - living direct to their south, bands listed from west to east)

All content from Kiddle encyclopedia articles (including the article images and facts) can be freely used under Attribution-ShareAlike license, unless stated otherwise. Cite this article:
Hualapai Facts for Kids. Kiddle Encyclopedia.