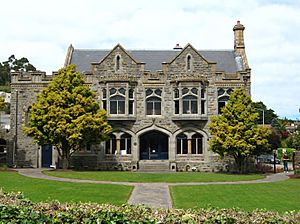 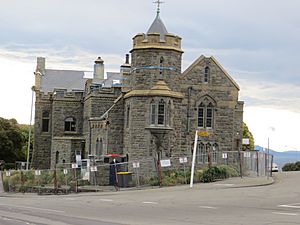 Earthquake damaged Sign of the Takahe in 2013 viewed from south 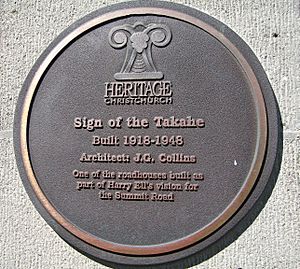 The Sign of the Takahe Once a fine dining restaurant it is today open to all. A welcoming unique casual family friendly café/bar with casual evening dining. It has an amazing wedding & function space, built in the style of an English Manor House. Designed by J. G. Collins, construction was carried out between 1918 and 1948. The Takahe also provides one of the better panoramic views of the city of Christchurch, New Zealand, the Canterbury Plains and the Southern Alps.

Named after the flightless native New Zealand bird, the Takahe, it was initially one of the roadhouses planned by Henry George (Harry) Ell as part of his scheme to preserve the natural state of the Port Hills which overlook Christchurch and Lyttelton harbour.

Ell had envisaged four roadhouses being built, and three were completed before Ell's death in 1934. These were Sign of the Kiwi, Sign of the Bellbird and Sign of the Packhorse.

However, Ell wished the Takahe to be a more substantial structure and spent years studying design of English Manors, castles and inns, to be incorporated into the final construction of the Takahe. Indeed, the dining room is an exact replica of the historic Haddon Hall in Derbyshire.

A great deal of improvisation was required to minimise cost. For example, the stone was quarried locally from the Port Hills and hand chiseled into blocks using primitive tools, the heavy Kauri beams in the entrance hall were salvaged from a former bridge over the Hurunui River and the ceilings in the inner most dining room were painted on timber cut from packing cases.

The building has a Category I listing with Heritage New Zealand. It is located adjacent to Cracroft Reserve.

All content from Kiddle encyclopedia articles (including the article images and facts) can be freely used under Attribution-ShareAlike license, unless stated otherwise. Cite this article:
Sign of the Takahe Facts for Kids. Kiddle Encyclopedia.