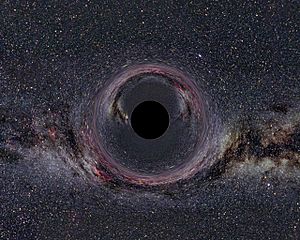 This image is a simulation of what a black hole might look like. No black hole has ever been photographed.

A simulation is a way of seeing a thing happen without it actually taking place in the same way. A simulation can be used to predict what might happen without doing it, in case it is dangerous or too expensive or difficult. It can also be used to show people what will happen next, or what happened in the past. It can also show what people believe is happening in a place or time where it is impossible to know what really happens.

There are research institutions just devoted to simulations, like, e.g., The George E. Brown, Jr. Network for Earthquake Engineering Simulation or NEES.

Simulations are very useful all over the world, because in a simulation things can be controlled that might not be easy to control in real life. They can use or smaller versions of an object or system for testing or practice. They can often use smaller versions of things, like space ships or rooms, to simulate the real thing. They can also use a safer thing in place of a thing that is dangerous, like when astronauts practice in a swimming pool rather than in outer space. Astronauts also practice in simulations of the moon before they went and landed there, and in simulations of spaceships that move the way real spaceships do, so they can get used to it. Simulations often use computers or television. Computers are used to make simulations of what a spaceship's route might be on the way to the moon, to help plan the mission.

All content from Kiddle encyclopedia articles (including the article images and facts) can be freely used under Attribution-ShareAlike license, unless stated otherwise. Cite this article:
Simulation Facts for Kids. Kiddle Encyclopedia.