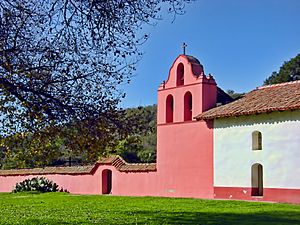 The Original Mission La Purísima or the Site of the original mission and remaining ruins of La Purisima Mission is a California Historical Landmark in Lompoc, California. The site was the location of the California Mission from its founding on December 8, 1787, by Fermín Lasuén till it was destroyed by the 1812 Ventura earthquake on December 12, 1812. At the site are still a few remains of the old mission. The ruins are located at 541 South F Street, Lompoc, Santa Barbara County, California. The site became a California State Historical Landmark No. 928 on June 29, 1979. La Purisima Mission was moved to a new site three miles away to the northeast. The original mission was associated with the Presidio of Santa Barbara. Fermín Lasuén (1736-1803) was a Spanish Franciscan missionary to Alta California and the president of the Franciscan missions. He was the founder of nine of the twenty-one Spanish missions in California including original Mission La Purísima, the 11th mission.

NO. 928 SITE OF ORIGINAL MISSION AND REMAINING RUINS OF BUILDINGS OF MISSION DE LA PURÍSIMA CONCEPCIÓN DE MARÍA SANTISIMA - The ruins at this site are part of the original Mission La Purísima, founded by Padre Fermín de Lasuén on December 8, 1787, as the 11th in the chain of Spanish Missions in California. The mission was destroyed by earthquake on December 12, 1812, the present Mision (mission) La Purisima was then established several miles away.

All content from Kiddle encyclopedia articles (including the article images and facts) can be freely used under Attribution-ShareAlike license, unless stated otherwise. Cite this article:
Site of original mission and remaining ruins of La Purisima Mission Facts for Kids. Kiddle Encyclopedia.