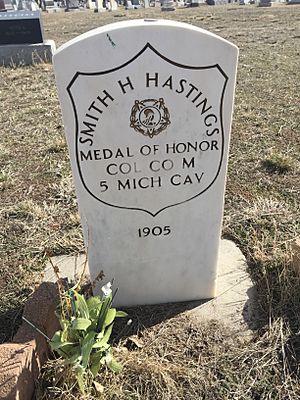 Smith H. Hastings (December 27, 1843 - October 13, 1905) was a Union Army soldier in the American Civil War who received the U.S. military's highest decoration, the Medal of Honor.

Hastings was born in Quincy, Michigan on December 27, 1843. He was awarded the Medal of Honor, for extraordinary heroism on July 24, 1863, while serving as a Captain with Company M, 5th Michigan Volunteer Cavalry Regiment, at Newbys Crossroads, Virginia. His Medal of Honor was issued on August 2, 1897.

He died at the age of 61, on October 13, 1905 and was buried at the Riverside Cemetery in Denver, Colorado.

All content from Kiddle encyclopedia articles (including the article images and facts) can be freely used under Attribution-ShareAlike license, unless stated otherwise. Cite this article:
Smith H. Hastings Facts for Kids. Kiddle Encyclopedia.