Solway is a suburb in the southern part of Masterton, a large town in the Wairarapa Valley. Solway is the second largest suburb in the town after Lansdowne.

Solway is a community with beautiful green area's, Millennium Park Reserve, which is man made, but is full of wildlife. South Park where teams play softball, people walk their dogs and children & families play. This Community as a whole is thriving with two small shopping centers that are streaming with life..this is Solway Community!!...come and enjoy.

Solway is home to some of the newest and most modern homes in the Wairarapa. The recent building of Solway Park has attracted more residents to the suburb, with a huge lifestyle block full of up to date homes. Solway park is also home to the most expensive restaurant and hotel in Masterton, The Copthorne.

Housing demand in the area continues to grow with consent for an 80-lot subdivision granted in September, 2013.

Solway is served by many forms of public transport. State Highway 2 (or High Street), runs straight through the middle of Solway.

Solway is also served by rail, having its own Solway Railway Station, which connects residents to the cities of Upper Hutt, Lower Hutt and Wellington. Its close proximity to Solway College makes it popular with its students, which board in Masterton and live in Wellington.

Solway is also supported by the Community collaboraion of Health sectors, supporting the community in need of transport to Health providers, e.g. Masterton Medical, Whaiora and the Hospital (DHB). 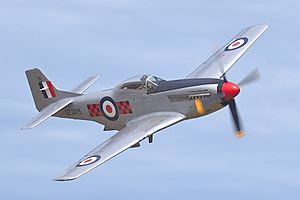 The Wings over Wairarapa Air Show is at Hood Aerodrome

Hood Aerodrome is in Solway though as of 2015, there are no commercial flights from it. From early 2009 until late 2013 Air New Zealand provided flights to Auckland, operated by subsidiary Eagle Airways six days a week, mainly to serve business customers in the Wairarapa. There have been a few other unsuccessful attempts at commercial air travel in Masterton, mostly failing due to its proximity to major airports in Wellington and Palmerston North. The most significant was by South Pacific Airlines of New Zealand (SPANZ), which operated daily flights using DC3s during the sixties to destinations nationwide until the airline's closure in 1966.

Peter Jackson is an avid aviation enthusiast and owns a collection of over 40 flyable World War I-era warbirds housed at Solway's Hood Aerodrome. 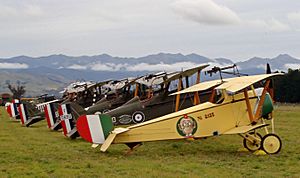 All content from Kiddle encyclopedia articles (including the article images and facts) can be freely used under Attribution-ShareAlike license, unless stated otherwise. Cite this article:
Solway, New Zealand Facts for Kids. Kiddle Encyclopedia.