Kids Encyclopedia Facts
This page is about how the sotol plant is used for an alcoholic beverage, food, or tools. For botanical information on the plant, see Dasylirion wheeleri.

Sotol is a distilled spirit of Mexican origin sourced from the family of Asparagaceae; the genus Dasylirion and several species, most commonly: Dasylirion wheeleri, Dasylirion durangense, Dasylirion cedrosanum, and Dasylirion leiophyllum, less commonly with Dasylirion texanum and Dasylirion lucidum (commonly known as Desert Spoon or, in Spanish, sotol, sereque, cucharilla, or palmilla), a plant that grows in the Chihuahuan desert of northern Mexico, New Mexico, Arizona, and west and central Texas. Sotol liquor is a Mexican drink that is known as the state spirit of Chihuahua, Durango and Coahuila. Sotol has its own appellation of origin since 2002, and may be produced only in Chihuahua, Coahuila and Durango. There are dozens of commercial examples available. Production of sotol spirits exists outside the Sotol Denomination of Origin in several regions such as Sonora, Oaxaca, and the Texas Hill Country.

It is produced in a manner similar to the more common artisanal mezcals of central Mexico.

At the Fate Bell Shelter, a 150-yard-long opening in a large rock face on the U.S. side of the Rio Grande, sotol is depicted in paintings on the rock walls. Sandals, baskets, ropes, mats and many other items of sotol fiber show that the resource was highly important to Ancestral Puebloans of the Basketmaker culture. These artifacts date to around 7000 BCE.

The base of a cooked sotol stem may be eaten much like an artichoke leaf (by scraping across the front teeth). The remnant, called a "quid", resembles a spoon and can be used as one. Archaeological sites where "Desert Spoon" was eaten in this way are full of discarded quids thousands of years old.

Sotol and lechuguilla flower-stalks used as atlatl dart hind-shafts were found in a Ceremonial Cave (Hueco Mountains, near El Paso, Texas). Sotol may also have been affiliated with fire; the sotol stem was used as a fireplow.

A humanoid figure with a spray of spiky leaves for a head and a black stripe down the middle of its body may represent the magical spirit of sotol. Sometimes it appears in connection with hunting scenes, at others it appears surrounded by orange ochre flames and black smoke.

The presence in these rock shelters of troughs a half-meter long and four centimeters deep, along with mounds of quids, suggests the production of beverages with sotol as far back as 9000 years ago. The murals depicting sotol-related images may, in part, be a tribute to the remarkable usefulness of the plant, especially at sites like the Fate Bell Shelter.

The Chihuahuan indigenous people, the Rarámuri, fermented sotol juice into a beer-like alcoholic beverage as early as 800 years ago. In the 16th century, Spanish colonists introduced European distillation techniques to produce a spirit. Sotol is now beginning to achieve international recognition like its cousins, mezcal and tequila.

The Desert Spoon takes approximately 15 years to mature and yields only one bottle of sotol per plant. It typically grows on rocky slopes in the Chihuahuan desert grassland between 3,000 and 6,500 feet above sea level. Unlike agave, which flowers only once in its lifetime, sotols produce a flower stalk every few years. Once the plant matures, it is harvested like agave plants when mezcal or tequila are to be made. The outer leaves are removed to reveal the center core, which is taken back to the distillery. The core can then be cooked and/or steamed, shredded, fermented, and distilled. 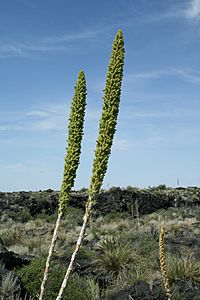 All content from Kiddle encyclopedia articles (including the article images and facts) can be freely used under Attribution-ShareAlike license, unless stated otherwise. Cite this article:
Sotol Facts for Kids. Kiddle Encyclopedia.