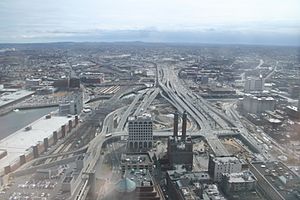 The South Bay Interchange connects Interstates 90 and 93 with local streets. This photo was taken from the 44th floor of One Financial Center.

South Bay is a 10-acre (40,000 m²) site in Boston, Massachusetts between Chinatown and the Leather District. It is roughly bounded by Kneeland Street, Hudson Street, the Massachusetts Turnpike mainline, and the Interstate 93 mainline. Currently owned by the Massachusetts Turnpike Authority (MTA), the site is being put up for development. The developer with the winning bid could put up an office tower as high as 600 feet, but the site is being envisioned as a mixed-use project anchored by office towers, that would include parkland, retail, hotel, and residential space. The South Bay development will serve as the southern anchor of the Rose Kennedy Greenway, a stretch of parks, museums, and civic spaces that will replace the Central Artery.

Currently, the site is partly occupied by basketball courts, temporary highway ramps for the Central Artery, and the old Wang Building, the headquarters for the Big Dig. Most of this will be demolished to make way for the new development.

If current plans prevail, this development will be the largest in scale and scope in the Boston area since the construction of the Prudential Tower in 1964. It is hoped that the project will integrate into the surrounding street grid.

The South Bay district, as well as the adjacent Chinatown and Leather District neighborhoods, sit on filled land. Once part of South Cove, a portion of Boston's South Bay, it was filled in 1833 by the South Cove Corporation, who built an intermodal train/sea station as part of the Boston and Worcester Railroad. This development included residential and commercial area, and what was considered at the time to be the largest hotel in the United States. Throughout most of the 19th Century and the early half of the 20th Century, the district was made up of rail yards serving railroads entering Boston from the south and west.

The rail yards and terminus attracted leather and garment businesses, which constructed the commercial buildings in the adjacent Leather District. Similarly, the railroad served as an immigrant gateway, a role which it played beginning in the late 19th century for many Asian newcomers, particularly Chinese.

In the 1950s, the Massachusetts Highway Department displaced much of the rail yards to build the John F. Fitzgerald Expressway (the Central Artery). Later the South Bay interchange connected the Central Artery to the Massachusetts Turnpike. The intersection has been reconstructed by the Big Dig. Most of the highway has been buried, leaving these parcels available for development.

All content from Kiddle encyclopedia articles (including the article images and facts) can be freely used under Attribution-ShareAlike license, unless stated otherwise. Cite this article:
South Bay, Boston Facts for Kids. Kiddle Encyclopedia.