The Southern Michigan Railroad Society is a railway museum in Clinton, Michigan, United States. It has preserved 13.5 miles (21.7 km) of track and a variety of railroad equipment including the only GMDH-3 locomotive ever built. Trains are operated on a seasonal schedule. 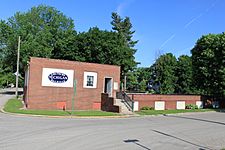 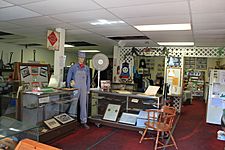 The Society began as the "Lenawee Area Railroaders", an informal association of railway buffs and modelers. They held monthly gatherings in Tecumseh, Clinton and Adrian, Michigan, and starting in June 1981 they published a newsletter, "The Cross Tracks". In 1982 when it was learned that Conrail would abandon their Clinton Secondary Track they founded the nonprofit Southern Michigan Railroad Society, a volunteer membership organization, "to back an attempt by local citizens to purchase and preserve the former New York Central Railroad's Clinton Branch rail line."

In 1983 the Society purchased the abandoned former Clinton Engines building, located adjacent to the railroad at 320 S. Division Street from The Village of Clinton for a nominal sum. In July 1984, they reached agreement with Conrail to purchase the railroad, for $100,000.

In 1985, a small "track speeder" motorcar had been donated to the Society, and during Clinton's Fall Festival, speeder rides were improvised for the public. This was successful. The Society was able to obtain other motorcars, and for several years operated a successful passenger service while they gathered funds to truck in full-size equipment. At the height of motorcar operation, there were two "motorcar trains" of up to 5 motorcars running simultaneously between Clinton and Tecumseh.

The first large equipment to be obtained was an operating Plymouth locomotive and two cabooses. Within a few years, this was augmented with a pipe gondola car fitted for carrying passengers. Later, a 1920 Chicago South Shore interurban car was added to the train. Additional locomotives arrived, including a former Western Maryland Railway GE 44-ton and the GMDH-3.

In September 2009 a hostile takeover attempt was launched against the Society by a Tecumseh-area property developer and lawyer.

In 2013 the Society acquired a 22,000 square foot shop building in Clinton to be used as a maintenance and restoration facility. 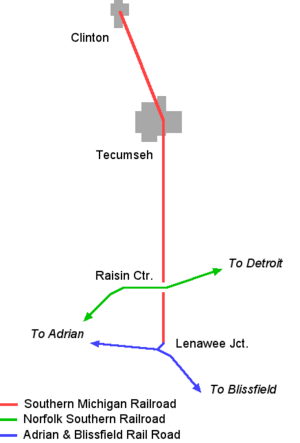 The railroad runs 5 miles (8.0 km) between the towns of Clinton and Tecumseh during the summer months and 6.5 miles (10.5 km) from Tecumseh to the rural railroad junction of Raisin Center, where the track originally crossed the Norfolk Southern mainline. An additional two miles of track (now disconnected from the northern section) runs from Raisin Center to Lenawee Junction. Most trains operate between the Clinton and Tecumseh, permitting stopovers. In October, "Fall Color Tours" traditionally used the longer 6.5-mile (10.5 km) segment to Raisin Center, although in 2014 and 2015 they were run between Clinton and Tecumseh instead. Fall Color Tours will return to its traditional route in 2016.

A notable feature of the line is Bridge 15, a Howe deck truss bridge listed in the National Register of Historic Places.

Operations typically run from May to October and December, usually operating between Clinton and Tecumseh. Special events include Clinton's Fall Festival in late September, color tours between Tecumseh and Raisin Center in October, and a "Santa train" in December.

The train typically includes a South Shore car, passenger gondola and a caboose or two, powered by a 44-ton diesel.

Among the Society's equipment:

All content from Kiddle encyclopedia articles (including the article images and facts) can be freely used under Attribution-ShareAlike license, unless stated otherwise. Cite this article:
Southern Michigan Railroad Society Facts for Kids. Kiddle Encyclopedia.