See Giraffe for details on how this proposed taxonomy fits within the currently accepted taxonomy of giraffes. 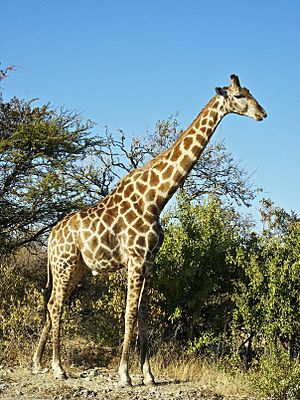 An Angolan giraffe in the savannahs of Etosha National Park, Namibia.

Southern giraffes have rounded or blotched spots, some with star-like extensions on a light tan background, running down to the hooves. They range from South Africa, Angola, Namibia, Botswana, Zambia, Zimbabwe, Mozambique. Their approximate population is composed of 44,500 individuals.

All giraffes are considered Vulnerable to extinction by the IUCN.

Living giraffes were originally classified as one species by Carl Linnaeus in 1758, under the binomial name Cervus camelopardalis. Morten Thrane Brünnich classified the genus Giraffa in 1772. Once considered a subspecies of the conglomerate Giraffa camelopardalis species, recent studies proposed the southern giraffe as a separate species of a reorganised genus Giraffa, under the binomial name Giraffa giraffa. However, the taxonomic scheme has been criticized, and currently the IUCN recognizes only one species of giraffe with nine subspecies.

The Cape subspecies of the southern giraffe has dark, somewhat rounded patches "with some fine projections" on a tawny background colour. The spots extend down the legs and get smaller. The median lump of bulls is less developed.

The southern giraffes live in the savannahs and woodlands of northern South Africa, Angola, southern Botswana, southern Zimbabwe, Zambia and south-western Mozambique. After local extinctions in various places, the South African giraffes have been reintroduced in many parts of Southern Africa, including in Swaziland. They are common in both inside and outside of protected areas.

Southern giraffes usually live in savannahs and woodlands where food plants are available. Southern giraffes are herbivorous mammals. They feed on leaves, flowers, fruits and shoots of woody plants such as Acacia.

Southern giraffes are not threatened, as their population is increasing.

All content from Kiddle encyclopedia articles (including the article images and facts) can be freely used under Attribution-ShareAlike license, unless stated otherwise. Cite this article:
Southern giraffe Facts for Kids. Kiddle Encyclopedia.