Spanish Bay is a bay in the Canadian province of Nova Scotia. It is located on the Atlantic coast of Cape Breton Island at the mouth of Sydney Harbour, which forms part of Spanish Bay. The current name for the bay, "Spanish Bay" (sometimes "Spanish Harbour", "Spaniards Bay" or "Port aux Espagnols") appears on maps of the area at least as far back as 1708. 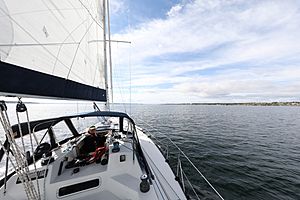 Communities along the shoreline of Spanish Bay include (from northwest to south to northeast):

All content from Kiddle encyclopedia articles (including the article images and facts) can be freely used under Attribution-ShareAlike license, unless stated otherwise. Cite this article:
Spanish Bay (Nova Scotia) Facts for Kids. Kiddle Encyclopedia.