Spike Island is a park in Widnes, Halton, North-West England. It is an artificial island between the Sankey Canal and the estuary of the River Mersey containing parkland, woodland, wetlands and footpaths. It is next to the Catalyst Science Discovery Centre, an interactive science and technology museum.

Spike Island was at the centre of the British chemical industry during the industrial revolution. In 1833, Widnes Dock, the world's first rail-to-ship dock, was built on the island. In 1848, John Hutchinson built the first chemical factory in Widnes on the island. The chemical industry in Widnes grew rapidly thereafter. By the 1970s no working chemical factories remained, and from 1975 onwards the island was cleaned up and turned over to public recreation.

A famous concert by The Stone Roses, subsequently the subject of an eponymous film, took place on the island in May 1990. 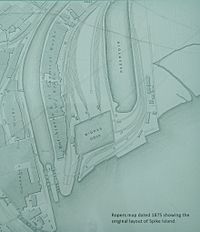 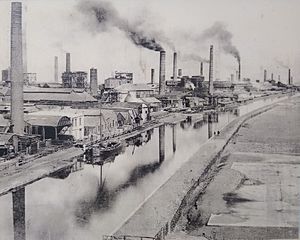 View of the Sankey Canal from Spike island circa 1900

Spike Island is an artificial island created in 1833 when the Sankey Canal was extended from Fiddler's Ferry to the River Mersey at Widnes. The extension separated a section of Widnes previously called Woodend from the remainder of the town. The canal passes from the West Bank Locks on Spike Island to Warrington and then into St. Helens town centre. The canal fell into disuse and closed in 1963. The canal footpath now forms part of the Trans Pennine Trail.

Widnes Dock, built in 1833, was the first rail-to-ship dock in the world. Uniquely the dock allowed goods, such as coal, to be taken off a train and deposited directly into a boat for transport along the River Mersey to other parts of the UK and abroad. Goods and raw materials could also be brought in via a boat and then deposited directly onto a train for onward travel to local factories. The dock was topped up with water from the nearby reservoir to prevent its level becoming too low when the River Mersey was at low tide. Widnes Dock was last used commercially in 1931 but the island remained in use as a railway sidings. The island had a network of interlinked railway lines, which being at the end of the line, were ideal for marshalling trains and freight storage. The railway lines became known as "Marsh Sidings". They were taken over by British Rail in 1948 and remained in use until 1968.

Large ships are unable to sail far up the River Mersey because the water level is too low. Consequently Widnes dock was accessed by Mersey flat boats which could transport goods downstream to the Port of Liverpool or along the canal network. The dock could hold up to 40 vessels, and have a single Mersey flat loaded with 70 tons of coal from a railway wagon, and on route to Liverpool in 40 minutes. The Mersey flats were small flat-bottomed sailing barges that originated on the Mersey but were later used on rivers elsewhere. They were a common sight in the 19th century. The wreck of a Mersey flat called the Eustace Carey can be seen at Spike Island at low tide.

Beginning in 1848, John Hutchinson built the first chemical factory in Widnes on Spike Island. It was called "Hutchinson's No 1 Works" and was constructed along the Sankey Canal near Widnes Dock. Thereafter chemical factories proliferated in the town. Around the year 1860 Hutchinson built Tower Building, which he used as the administrative headquarters of his chemical business. Later it became the head office of the Gossage soap company, which at one time was the largest soap company in the UK and handled half of the UK's soap exports. Today, Tower Building houses the Catalyst Science Discovery Centre. Hutchinson was described by his contemporaries as "the father of Widnes" because of his influence on the growth of the chemical industry in the town.

The island was at the centre of the British chemical industry during the 19th century and part of the Industrial Revolution. The chemical industry for the first time allowed the mass production of soap, bleaching powder, glass and fertilizer, amongst other products. The population of Widnes grew rapidly; however, the industry also brought exceptional levels of pollution. The town was described as one of the dirtiest and most dangerous places to work in England, and in 1905 as a "poisonous hell-town". In the 20th century, changes to the industry and new environmental laws led to the decline of the chemical industry. By the 1970s Spike Island contained abandoned chemical factories, rail lines, disused canal and industrial dockage, and extensive chemical pollution. Between 1975 and 1982 the island was reclaimed and returned to green spaces. All of the chemical works were removed and only two former pyrite kilns remain. 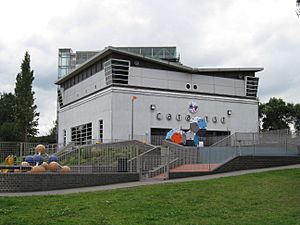 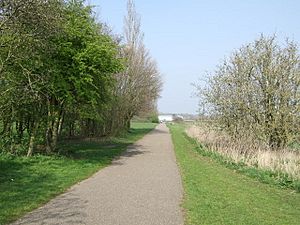 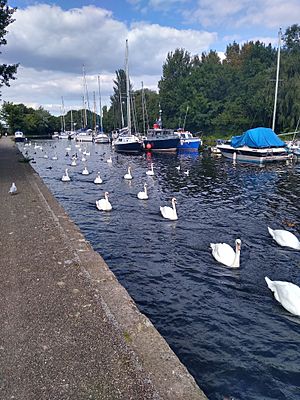 Swans swimming down the canal at Spike Island

The island is maintained by Halton Borough Council, who describe the island as "Open parkland with items of industrial archaeological interest and a canal". There are footpaths, canal walks, cycle paths, woodland, wetlands, views of the River Mersey, views of the Mersey Gateway Bridge, birdlife, fishing, industrial heritage, picnic tables, car parking, a multi-purpose sports pitch, a children's play area and the Trans Pennine Trail passes through the parkland.

Mersey riverboats are moored in the Sankey Canal. The canal, although in water, is not navigable past the island. Halton Borough Council has the long-term aim of restoring the canal to use by watercraft and has committed to building a new swing bridge on the island and re-opening the slipway between the canal and Mersey. The council has also committed to finding an alternative water supply for the canal which has lost water formerly supplied by the now-closed Fiddlers Ferry Power Station.

The Catalyst Science Discovery Centre is a museum dedicated to science and in particular chemistry. It is next to the island and charts the history of Widnes and Spike Island, offering hands-on displays, static displays and live science lectures. There are 80 interactive exhibits and re-constructed scenes bringing science, maths, engineering and technology to life. Two teaching spaces host a range of workshops and there is a café. There is an observatory on the top floor accessed via a glass-walled lift. The observatory offers panoramic views of the river, Widnes and the Mersey Gateway Bridge, which was opened in 2017.

All content from Kiddle encyclopedia articles (including the article images and facts) can be freely used under Attribution-ShareAlike license, unless stated otherwise. Cite this article:
Spike Island, Widnes Facts for Kids. Kiddle Encyclopedia.