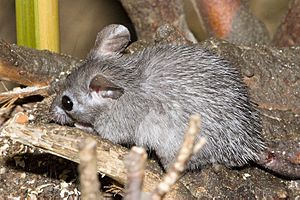 Spiny mouse at the Leipzig Zoo

The term spiny mouse refers to any species of rodent within the genus Acomys. They are usually called spiny mice in English. They look like mice of the genus Mus. Spiny mice are small mammals with bare, scaled tails. Their coats have unusually stiff guard hairs that work the same way as the spines of a hedgehog. These stiff hairs are why they are called the spiny mouse.

Even though they look like members of the genus Mus, scientists thhink that the African spiny mice may be more closely related to gerbils than to common mice.

African spiny mice originated in the deserts of Africa. They are often kept as exotic pets in other parts of the world, particularly Western nations such as the United States. In the pet trade, they are commonly called Egyptian spiny mice or, more simply, spiny mice. Though these animals are like pet mice and rats, the tail of a spiny mouse is much more delicate. The spiny mouse should never be picked up by its tail and should be handled with care to avoid a degloving injury.

Because of their desert origin, spiny mice need warm temperatures and should be kept around 80 degrees Fahrenheit. These animals are very social and should always be housed in groups when possible. As spiny mice are prone to obesity (getting too fat), it is important to provide a big space and a complex environment to encourage exercise. They need constant attention and should NEVER be housed in a cage smaller than 4X4 ft.

Gestation length is between 38 and 42 days. Litters are normally 2 to 3 pups, but females may have up to 6 pups in a single litter. Other females within the social group may help in the birthing process and look after the pups. Pups are born with their eyes open and covered in fur. They will begin to leave the nesting area at about 3 days of age. Pups are weaned around 5 to 6 weeks and reach sexual maturity at about 6 to 9 weeks. A female can become pregnant at any time in the year and may have up to 12 litters in a year. Spiny mice can live for 4 to 5 years.

All content from Kiddle encyclopedia articles (including the article images and facts) can be freely used under Attribution-ShareAlike license, unless stated otherwise. Cite this article:
Spiny mouse Facts for Kids. Kiddle Encyclopedia.