Spirit Lake is a lake in Skamania County, Washington, United States, located north of Mount St. Helens. It was a popular tourist destination for many years until Mount St. Helens erupted in 1980. Previously there had been six camps on the shore of Spirit Lake: Boy Scout (Camp Spirit Lake), the Girl Scout Camp at Spirit Lake, two YMCA camps (Camp Loowit, and Portland YMCA camp), Harmony Fall Lodge, and another for the general public. There were also several lodges accessible to visitors, including Spirit Lake Lodge and Mt. St. Helens Lodge. The latter was owned and operated by Harry R. Truman, a noted victim of the volcano's 1980 eruption.

Prior to 1980, Spirit Lake consisted of two arms that occupied what had been the valleys of the North Fork Toutle River and a tributary. About 4,000 years ago, these valleys were blocked by lahars and pyroclastic flow deposits from Mount St. Helens to form the pre-1980 Spirit Lake. The longest branch of Spirit Lake was about 2.1 miles (3.4 km) long. A stable outlet channel flowed from the lake to the North Fork Toutle River across a natural dam composed of volcanic material. The level of Spirit Lake remained basically stable, at an altitude of about 3,198 ft (970 m).

Pre-eruption weather data from the Spirit Lake Ranger Station indicates the area either had the rare dry-summer variant of the subarctic climate (Köppen climate classification: Dsc), or the rare cold-summer mediterranean climate (Köppen climate classification: Csc), both of which are found only in small areas across the world. Recent climate data for the area is not available to confirm whether the post-eruption site still has either one of these rare climate types.

During the 1980 eruption of Mount St. Helens, Spirit Lake received the full impact of the lateral blast from the volcano. The blast and the debris avalanche associated with this eruption temporarily displaced much of the lake from its bed and forced lake waters as a wave as much as 850 ft (260 m) above lake level on the mountain slopes along the north shoreline of the lake. The debris avalanche deposited about 430,000,000 cubic metres (350,000 acre⋅ft) of pyrolized trees, other plant material, volcanic ash, and volcanic debris of various origins into Spirit Lake. The deposition of this volcanic material decreased the lake volume by approximately 56,000,000 cubic metres (45,000 acre⋅ft). Lahar and pyroclastic flow deposits from the eruption blocked its natural pre-eruption outlet to the North Fork Toutle River valley at its outlet, raising the surface elevation of the lake by between 197 ft (60 m) and 206 ft (63 m). The surface area of the lake was increased from 1,300 acres to about 2,200 acres and its maximum depth decreased from 190 ft (58 m) to 110 ft (34 m). The eruption tore thousands of trees from the surrounding hillsides and swept them into Spirit Lake. These thousands of shattered trees formed a floating log raft on the lake surface that covered about 40% of the lake's surface after the eruption.

After the eruption, Spirit Lake contained highly toxic water with volcanic gases seeping up from the lake bed. A month after the eruption, the bacteria-carrying water was devoid of oxygen. Scientists predicted that the lake would not recover quickly, but the reemergence of phytoplankton starting in 1983 began to restore oxygen levels. Amphibians such as frogs and salamanders recolonized the lake, and fish (reintroduced by fishermen) thrived. 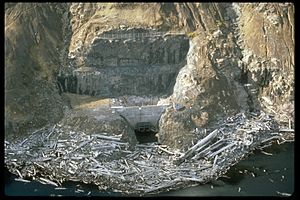 The water level of Spirit Lake is maintained at about 3,406 ft (1,040 m) by draining water through Spirit Lake Outlet Tunnel, a gravity-feed tunnel completed in 1985. The 8,465-foot-long (2,580 m) tunnel was cut through Harrys Ridge to South Coldwater Creek, which flows to Coldwater Lake and into the North Fork of the Toutle River. Had the lake level not been stabilized, the dam, which was composed of volcanic avalanche debris created by the 1980 eruption, would have been breached and caused catastrophic flooding within the Toutle River Valley.

All content from Kiddle encyclopedia articles (including the article images and facts) can be freely used under Attribution-ShareAlike license, unless stated otherwise. Cite this article:
Spirit Lake (Washington) Facts for Kids. Kiddle Encyclopedia.