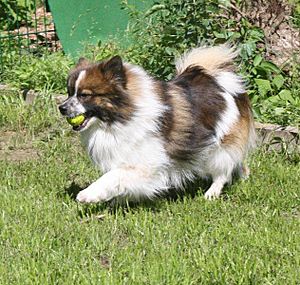 Spitz-type breeds of dog have a long thick coat of fur that is often white, and pointed ears and noses. Many times, the tail is over the dog's back.

No one knows where Spitz-type dogs came from, though most seen today live in the Arctic. There is no archaeological signs showing stages between the wolf and Spitz-type dogs, but Spitz-like skeletons have been found up to 5,000 years old.

Though it is not certain for how long wolves have bred with Spitz-type dogs, it is known that humans have bred Spitz types with wolves in more recent times to get wolf-like breeds such as the Alaskan Malamute.

About 3000 years ago, dogs began to migrate from the Arctic into temperate Europe, North America, Asia, and sometimes Africa. Skeletons from around 2,000 years ago in Switzerland show that Spitz-type dogs have lived in central Europe for thousands of years. These dogs are the ancestors of the European Spitz-types, such as the German Spitz and Schipperke. Many Spitz-types also migrated into Korea and China. Later, many of these dogs were moved by humans to Japan, most likely from Korea. These Asian Spitz types are the ancestors of today's breeds such as the Chow Chow and the Akita Inu. 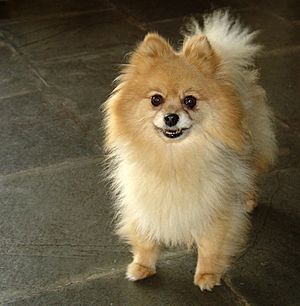 Through special breeding, Spitz types have evolved to help humans in three ways: hunting, herding, and pulling sleds. Smaller breeds such as the Finnish Spitz and the Lundehund were used in Scandinavia to hunt birds and smaller mammals. Larger breeds such as the Karelian Bear Dog and the Norwegian Elkhound were used for hunting large animals like moose and elk. The largest of all the Spitz types, notably the Canadian Eskimo Dog and the Greenland Dog, were used to pull sleds up until the 19th century.

Spitz types are good at living in cold northern climates. They often have a warm, water-proof layer of fur that is thicker than the outer layer of fur. Small ears help reduce the risk of frostbite, and thick fur that grows on the paws protects the dogs from sharp ice.

Many Spitz-type breeds behave like wolves in their independence and aggression towards new humans and animals. They may need much training before they become friendly. Some, like the Karelian Bear Dog, are not friendly enough to ever become companion dogs.

The cuteness of the Spitz-type have caused people to create companion dog breeds from them. The very small Pomeranian was at first a much larger dog similar to a Keeshond before being bred to make a small court animal. The Keeshond, is a friendly and loyal, though very lively, pet. Other companion Spitz-type dog breeds is the American Eskimo Dog, and the intelligent Japanese Spitz.

All content from Kiddle encyclopedia articles (including the article images and facts) can be freely used under Attribution-ShareAlike license, unless stated otherwise. Cite this article:
Spitz (dog) Facts for Kids. Kiddle Encyclopedia.