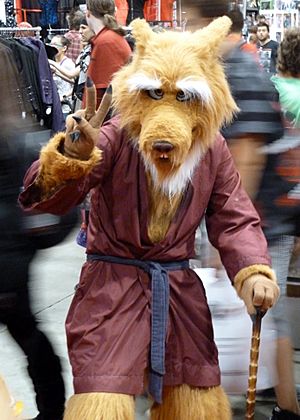 A cosplayer dressed up as Splinter.

Splinter is the mentor figure for the Teenage Mutant Ninja Turtles. He is a rat who raised the four turtles.

Splinter has been played by Kevin Clash, Mako Iwamatsu, and Tony Shalhoub in movies based on TMNT.

All content from Kiddle encyclopedia articles (including the article images and facts) can be freely used under Attribution-ShareAlike license, unless stated otherwise. Cite this article:
Splinter (Teenage Mutant Ninja Turtles) Facts for Kids. Kiddle Encyclopedia.