Sports in Cincinnati facts for kids 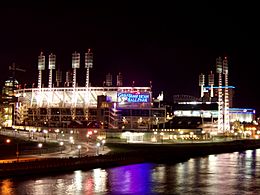 The suburb of Mason hosts the professional international tennis event, the Western & Southern Open. The men's Masters is one of the elite nine ATP World Tour Masters 1000 events, and the Women's tournament is a Premier event on the WTA Tour.

Nearby Sparta, Kentucky is home to Kentucky Speedway.

In March 2005 and 2006, the U.S. Bank Arena hosted the Atlantic 10 Conference men's basketball tournament. BB&T Arena, then known as The Bank of Kentucky Center, hosted the Elite Eight of the NCAA Men's Division II Basketball Championship in 2012.

Every May since 2000, Cincinnati has hosted the annual Flying Pig Marathon which winds through downtown and Northern Kentucky.

A 2014 college basketball game that elevated brain tumor patient Lauren Hill to national prominence and was named Best Moment at the 2015 ESPY Awards was played at Cintas Center on the Xavier University campus.

The Sphere - Cincinnati's Premier Sports Facility is home to two ice sheets that are home to the Queen City Steam travel hockey organization. It is also home to an inline hockey rink that has a large adult hockey league. There are also 6 basketball courts that host many tournaments, as well as, youth and adult leagues.

Within the urban core of the city and its immediate surroundings, the Steps of Cincinnati offer an urban hiking experience.

Cincinnati and the surrounding metropolitan area has a multitude of disc golf courses.

All content from Kiddle encyclopedia articles (including the article images and facts) can be freely used under Attribution-ShareAlike license, unless stated otherwise. Cite this article:
Sports in Cincinnati Facts for Kids. Kiddle Encyclopedia.