Kids Encyclopedia Facts
This page is about the yellow puppy character first published in 1980. For other dogs named Spot, see Spot. 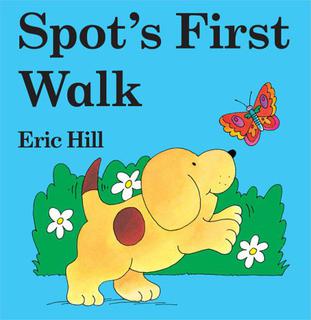 Spot is a fictional puppy created by Eric Hill, an English author and illustrator of children's picture books. The success of Hill's books about Spot led to other media productions, including television and home video titles, music albums, and CD-ROM titles.

In the 1990s a number of books were released with sound effect, produced by Publications International and published by Frederick Warne. The U.S. edition of the sound books were somewhat different from the U.K. editions of the book. The text in these editions is slightly altered, and in some cases, the title is changed as well. They are produced and published by Publications International.

With the success of the books the BBC commissioned an animated series, which first appeared on 9 April 1987; with Paul Nicholas providing the narration, and re-narrated in 2000 by Jane Horrocks. The series aired on television channel across the world, including RTÉ in Ireland, with the series dubbed into an Irish language with the title Echtrai Bhrain. A DVD version was released in Japan in 2005 with Japanese, English and Instrumental sound tracks. The DVDs used the same name for Spot as the books in Japan, that being コロちゃん (Korochan). In the US, the shows are distributed by Walt Disney Home Video.

The first series of The Adventures of Spot, which was animated and produced by King Rollo Films, aired on the BBC between 9 April and 17 July 1987. It consisted of 13 episodes, each 5 minutes long. The episodes were narrated by Paul Nicholas (original version) and the music was composed by Duncan Lamont (original version).

Episodes in this series:

Episodes in this series:

Spot's Musical Adventures, very similar to The Adventures of Spot, aired between 25 October and 10 November 2000. Like The Adventures of Spot, this series consisted of thirteen episodes, but this time, with a short song in them. The format of the series reverted to the narration format used prior to the specials. For these episodes, however, comedian Jane Horrocks was given the role of the narration and voices, instead of Paul Nicholas.

All content from Kiddle encyclopedia articles (including the article images and facts) can be freely used under Attribution-ShareAlike license, unless stated otherwise. Cite this article:
Spot (franchise) Facts for Kids. Kiddle Encyclopedia.