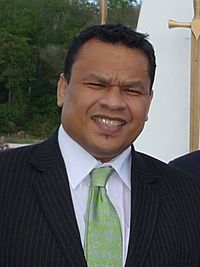 Sprent Arumogo Dabwido (16 September 1972 – 8 May 2019) was a Nauruan politician. He served as the President of Nauru from 2011 to 2013. He was a member of Nauru First. He also served as a member of the Nauruan Parliament for Meneng from 2004 until his death in 2019. Before entering politics, Dabwido was a super-heavyweight weightlifter and was the national champion of his country.

All content from Kiddle encyclopedia articles (including the article images and facts) can be freely used under Attribution-ShareAlike license, unless stated otherwise. Cite this article:
Sprent Dabwido Facts for Kids. Kiddle Encyclopedia.